Truck Series Back At The Perfect Track 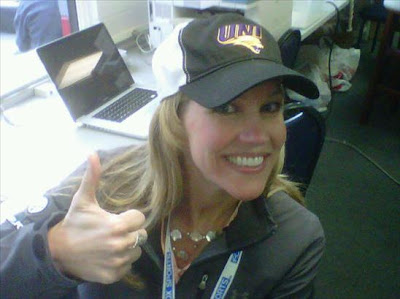 Here come the trucks again and this time the racing will be more about beating and banging than aero push and drafting. Saturday afternoon, the Camping World Trucks will be running at the bullring in Martinsville, VA. The ultimate payback track.

Krista Voda starts the coverage at 1:30PM with The Setup. Pit reporters Ray Dunlap and Adam Alexander provide the interviews. There are some new faces, some Cup Series cross-over drivers and several good storylines unfolding in this series.

Rick Allen comes along at 2PM to call the race. As usual, he will have Phil Parsons and Michael Waltrip alongside. It's been an interesting couple of weeks for these two gentlemen, especially where their shared Sprint Cup Series ownership interests are concerned. Waltrip even started and parked one of Parsons' Cup cars in Bristol last week.

Waltrip suggests that spending the weekend with the Parsons crew allowed him to prepare better for Talladega, where he will be racing Parsons' car for the entire event. Money is doing a lot of talking in the sport where these two are concerned.

The trucks need a solid show of good racing to get the series back into the TV highlights and return it to the popularity of 2009. The CWTS schedule for this season leaves a lot to be desired during this early stretch.

The familiar CWTS production team from SPEED is handling this event. That should result in some old school NASCAR TV and get away from what FOX has been offering. Following the leader and overusing in-car cameras has made the Cup Series tough to watch at times this year. SPEED follows the stories, shows the racing and lets the pit reporters provide a lot of information.

Rain washed out much of Friday's activity, including the CWTS qualifying. We will provide updates on this post and on Twitter about the weather during the morning hours. Larry McReynolds, amateur meteorologist, said the rain would clear out well before the truck race.

The big twist on Saturday is the low-key introduction of TruckBuddy. The folks at Turner Interactive, through the NASCAR.com website, are offering the CWTS version of RaceBuddy. Click here for the direct link to the page.

Although slightly smaller and with a few less features, having an online application like this for the race is a big step in the right direction. Letting fans get involved in picking video streams and choosing cameras while watching the race on SPEED is the wave of the future.

Hopefully, the success of this TruckBuddy experiment may lead to the application being sponsored and rolled-out again this season. Dodge is using the Ram brand to pay the bill and let users have TruckBuddy for free on Saturday. Nice move.

Let's use this post to get your comments before, during and after the CWTS race from Martinsville. To add your TV-related opinion, just click on the comments button below. This is a family-friendly website, please keep that in mind when posting. Thanks!
Posted by Daly Planet Editor at 12:15 AM 87 comments: