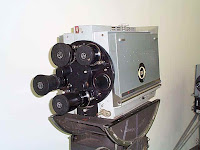 The first week in July is normally a good time to take a break, and look back on the first half of the year. In the NASCAR world, Brian France uses this week to deliver a "state of the sport" address to the media via a conference call.

This year, France made a point to single out TNT and their upcoming "wide open" coverage of the Pepsi 400. He also welcomed ESPN back to NEXTEL Cup and said he looked forward to having them on-board. He then remarked that TV ratings go up-and-down, and he did not feel lower ratings this year had any meaning. Those were his comments on the NASCAR TV scene.

Over the past six months, many readers of The Daly Planet have come to this site through other "link" pages on sites like Jayski.com. In looking at the thousands of stories and articles listed on Jayski since February, one thing is very clear.

The NASCAR print and Internet media avoids writing about NASCAR's TV partners at all costs. Apparently, the penalties for speaking out about bad NASCAR TV are more severe than COT violations.

Once and a while, someone like David Poole might get upset at something on TV, but unlike the entertainment industry, most of NASCAR's TV coverage goes without any national scrutiny in the traditional media.

Yet, almost all the reporters watch the race on TV in the Media Center at the track in the air conditioning while eating NASCAR's free food. They all watch the same thing as the fans, and yet the fans believe there are some TV issues that need to be addressed rather urgently. What happened to the NASCAR press?

The Daly Planet gets email from the Media Center at NASCAR events all the time. Most of the messages say the same thing. They could not agree more with the points being raised by the columns, and the reader comments. Unfortunately, there has never been one follow-up story or one feature on a TV network about these issues.

When NASCAR on Fox decided to only show the winner of the NEXTEL Cup races cross the finish line in the middle of their TV season, The Daly Planet email went absolutely ballistic. Fans could not believe that unless their driver won the race, they would have to be sitting in the stands at the track to see him finish. There was not a peep in the national media, even though they watched the same races.

This issue peaked when Kyle Petty finished third in the Coke 600. He was driving the Coke Zero car in prime time under the lights at Lowe's Motor Speedway. His best finish in many years, a Petty car in the top five, and the race sponsor's logo on the door. The NASCAR on Fox Producer decided not to show Kyle finish the race. Just like that, the massive power of TV smacked him down on purpose and declined to show him to the nation. Only The Daly Planet and its readers asked why.

When ESPN opened their Busch Series coverage with Chris Fowler, Brad Daugherty, and Brent Musburger, NASCAR fans could not believe it. The face of NASCAR looked a lot like the face of College Gameday. Since that show, ESPN has continued to struggle with their Busch pre-race show called NASCAR Countdown.

Rather than remark on these problems, the national press made sure to promote the fact that Monday Night Football sideline reporter Suzy Kolber was coming on-board to host that show in late July. The national press had absolutely no problem with the fact that she had never been to a NASCAR race...in her life.

Back in the studio, ESPN introduced Doug Banks as the host of NASCAR Now. This daily NASCAR show was the only one on TV, was done in cooperation with NASCAR, and was the "platform" for NASCAR news and information. There was only one small problem. Mr. Banks was the ABC Radio Network host of his own hip-hop urban morning radio show. Like Kolber, Banks was not a NASCAR fan, and had never been to a race...in his life.

The national media did not say a word. Several months and many painful shows later, Mr. Banks suddenly disappeared. He just vanished. The high-profile black on-air host of a national TV show had gone missing. Could you imagine if this was SportsCenter, Baseball Tonight, or Pardon The Interruption? The media would have a field day.

But, this was NASCAR with all its tight constraints and veiled threats of retaliation to those media members who "step out of line." There was not a word printed or published about Mr. Banks exit except on The Daly Planet. Why?

Over on SPEED, they were having an issue with one Michael Waltrip. Appearing on Inside NEXTEL Cup, Tradin' Paint, and the Craftsman Truck Series broadcasts, it was apparent that one thing had changed. He was no longer a driver, but an owner. In addition, he was very quickly an owner in crisis.

The NASCAR press never said a word as Waltrip was quietly removed from Tradin' Paint, eased out of the Craftsman Truck broadcasts, and toned-down on Inside NEXTEL Cup. The Daly Planet called it "Michael Waltrip's Free Pass" and questioned how this conflict of interest was not a problem...until suddenly he was mostly gone from TV.

Then, the NEXTEL Cup Series experienced TNT and things went south. Ending their second race at Michigan twenty minutes early, TNT talked to both DEI drivers and then started a vampire movie fifteen minutes early and signed-off the air. The entire field was there, with plenty of stories to tell, and yet suddenly America was watching Van Helsing.

Then, in Sonoma, TNT lost control of their broadcast, got completely lost on the air, showed only the top two cars for many laps, and finally went off the air without showing the final finishing order...of their own race.

Where was the NASCAR press? Were ESPN and SPEED afraid to address this issue on NASCAR Now and Inside NEXTEL Cup? The answer was absolutely. Even today, the TNT stories on The Daly Planet continue to get comments from fans nationwide.

There have been plenty of great TV stories this season to feel good about. ESPN's on-air announcing team for the Busch Series races has been strong. SPEED's Craftsman Truck broadcasts continue to set the bar for good NASCAR TV. Larry McReynolds and Kyle Petty have filled the hole left on the TNT broadcasts by the passing of Benny Parsons. Steve Byrnes has been an excellent host for many SPEED live shows, and has Hollywood Hotel written all over him for 2008.

The best new show is Survival of the Fastest on SPEED. A highly edited and glossy program dominated by an "NFL Films" style announcer, this show manages to "get over itself" and show the reality of the weekly struggle of race teams. Let's hope SPEED brings it back next season and expands this approach to the Busch and Truck Series.

The worst show so far this season is the slowly dying Inside NEXTEL Cup, also on SPEED. Dave Despain hosts a panel who are no longer relevant to today's NASCAR scene. Kenny Schrader lost his ride, Michael Waltrip is a mess, and Greg Biffle is often the only one on the panel who actually raced on Sunday. Since SPEED has declined to make a change at host to shake things up, hopefully the network will put this show out of its misery after November.

The story of the year is Allen Bestwick. He started as nothing more than an ESPN pit reporter for the Busch Series. Then, as the wheels came off the ESPN's NASCAR package, Bestwick was called up from the minor leagues to pinch hit. Bestwick has hosted outstanding versions of NASCAR Countdown, including the show immediately after Dale Junior's big announcement. He has gone to ESPN and hosted NASCAR Now from the studio. Friends of The Daly Planet who work at ESPN said Bestwick was so professional and smooth that it left them speechless.

Recently, Bestwick was asked to host the pre-race show and then do the play-by-play for an ESPN Busch Series race. The entire telecast was first rate. Now, as ESPN prepares to broadcast both the NEXTEL Cup and Busch Series races from July 28th through the end of the year, Bestwick's role is again unknown.

It is very probable that NASCAR Countdown will be hosted by Suzy Kolber with Brad Daugherty and Brent Musburger alongside. NASCAR Now continues to be hosted by the acerbic Erik Kuselias...the last original co-host still standing. If Bestwick again winds-up on pit road describing "four tires and fuel," it will be the biggest mistake ESPN makes all season.

Finally, thank you to all The Daly Planet readers who have taken the time to add their comments or send email in support of this project. We are very grateful for the outstanding contributions over the last five months.

Understand that The Daly Planet is being read by most of the on-air reporters and announcers who work on the NASCAR telecasts. Your comments have been welcomed, and have been the reason for many discussions and meetings. This site is read by our friends at SPEED, ESPN, NASCAR Images, and in NASCAR's offices.

There is no doubt about it, your input has directly affected the NASCAR TV programs that you have enjoyed watching this season. It has also affected the ones you have not particularly enjoyed. As we move through the next five months of the season, we have new shows on the horizon from SPEED for late July, new hosts on-board for ESPN, and ABC Sports carrying "The Chase" all the way to the end. It should be fun. Thanks again.

The Daly Planet welcomes comments from all readers. Simply click on the COMMENTS button below, or email editor@thedalyplanet.tv if you wish not to be published.
Posted by Daly Planet Editor at 10:55 PM 16 comments: