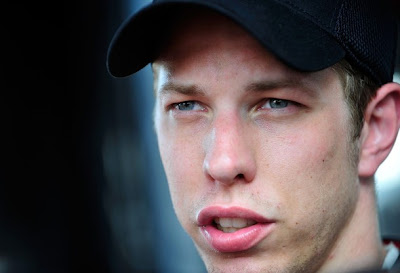 ESPN begins the stretch of the Sprint Cup Series season that has posed the biggest challenge for the Worldwide Leader in Sports. Now that the NFL is in season, the NASCAR Countdown pre-race show is moved to ESPN2. Then, the live race coverage will begin at 1PM over on ESPN.

The first race of the chase is today at the New Hampshire Motor Speedway. Allen Bestwick will host the pre-race show with Ray Evernham, Rusty Wallace and Brad Daugherty from the Infield Pit Studio.

It should be interesting to see what topics other than the Chase ESPN chooses to present. This is the time of the year where drivers outside of the Chase suddenly fall off the TV radar. Brad Keselowski is on the pole today and non-Chase teams normally begin to make changes at this time of the year.

Calling the race today is Marty Reid. These longer Sprint Cup Series races are new for Reid, who has a history in NHRA and IndyCar events. Reid often seems to talk just to fill air time, rather than let the action unfold and keep the facts coming for the fans.

Joining Reid will be Dale Jarrett and Andy Petree. These two have been working in the politically correct mode which seems to be the NASCAR theme for this season. Comments have been polite, but perhaps not exactly reflecting the action and the intensity of the racing.

Tim Brewer will be in the Tech Garage. Dr. Jerry Punch, Jamie Little, Vince Welch and Dave Burns will be the pit road reporters. Pit stops may well be the key to this race, so the TV challenge is to document them under both green and caution flag conditions.

ESPN is going to roll-out some graphics and technology that was used last year to analyze pit stops. Each crew member will be timed on every movement and the results will be used to figure out who did a good job and who caused the problems. This should be interesting to watch.

Loudon is a classic flat track where tempers start to rise as the cars fight for position coming off the corners. Taking the low line often results in contact in the corner and a mess on the racetrack. Using low angle cameras is the way to keep the feeling of speed in the telecast and not just follow the leaders from the high cams in the tower.

This post will serve to host your comments on the Sprint Cup Series race from NHMS on ESPN. To add your TV-related comments, just click on the comments button below. This is a family-friendly website, please keep that in mind when posting. Thanks for taking the time to stop by The Daly Planet.
Posted by Daly Planet Editor at 11:30 AM 166 comments: