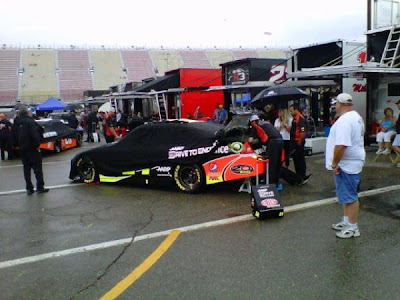 Update: Rain has stopped, track is pretty dry and it looks like a 3PM ET start time for the Cup Series.

It's raining at the Michigan International Speedway. Driver introductions are on hold and the day looks like it may be a long one. The stories of the day include tires, engines and Kurt Busch.

TNT faces an interesting challenge as the network goes on the air at noon ET. They did not replace Lindsay Czarniak as the infield host, instead opting to make Adam Alexander handle the pre-race and then call the race itself. Keep an eye on how the network handles the rain and if they move a veteran like Ralph Sheheen from pit road to the infield set.

While the Lizard Lick Towing skit was a disaster, the rest of the TNT pre-race show is solid. Kyle Petty and Larry McReynolds are a good panel for NASCAR topics and each week a different driver joins the show. This week, it's Brad Keselowski.

NASCAR brought in hard left side tires after blisters developed from the heat and high speeds after practice. Now with the rain, the rubber that caused the original problem is gone. It should be interesting to see TNT follow the tire story today.

Two Hendrick teams changed engines before the race, including Jimmie Johnson. Several other teams were talking about potential engine issues. MIS has a long acceleration period and is one of the hardest tracks on engines due to the high speeds. If a problem develops, it often develops for all the teams running the same brand of engine. This could be a big story.

Kurt Busch and ESPN's Marty Smith got into it after the Nationwide Series race in the Infield Media Center. Smith made it clear to Busch he does not take any guff from drivers like the very patient Bob Pockrass did last week. On the AM edition of NASCAR Now Smith provided a rundown of the moment and was not a happy camper about it.

"He can help a race team, he just can't help himself," said Darrell Waltrip of Busch on the morning RaceDay show. Keep an eye on how TNT treats this topic and follows Busch during the day in monitoring his radio traffic and his temper.

We will be live tweeting as usual using the #TDP1 hashtag. Twitter is easy to use, simple to operate and you control the content from start to finish. Drivers, officials and NASCAR personalities interact with us during the day. I would urge you to start an account for free and come on over.

There will be a "Race Wrap" post here right after the TV telecast is over for your comments. In the meantime, please feel free to leave TV and media comments during the race on this post. Thanks as always for stopping by The Daly Planet.
Posted by Daly Planet Editor at 11:43 AM 11 comments:

Who Ordered The Combo Platter? 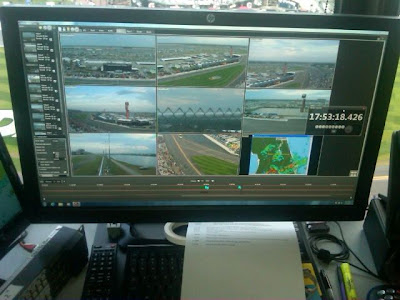 This is how NASCAR Race Control watches a Sprint Cup Series race. This is the updated replay system that has all kinds of video sources available, including the live weather radar. Except for the radar, all of the video NASCAR watches upstairs is in High Definition. Pretty nice set-up.

Over the last few weeks we have been discussing all kinds of options that fans have to "consume" a race. That term basically means watch, listen and interact live. The sport has come a long way in terms of digital technology with the promise of even more choices next year.

This is the TNT portion of the season, so additional options exist with that tech-friendly network. TNT provides a free streaming feed with multiple audio and video options called RaceBuddy. Those same video channels are often featured on the DirecTV service called Hot Pass.

Over in radio land, both MRN and PRN race broadcasts are now streamed online for both Internet and smart phone users without charge. The SiriusXM Satellite Radio race broadcasts are also streamed, but only for subscribers who have purchased either an auto or portable receiver.

Meanwhile, over at the NASCAR.com website there are still a bevy of services available for a price. The classic Raceview has morphed into Raceview 360 with every bell and whistle available. The drawback is the video of the live racing is not included. That too should change soon, perhaps even next season.

Sprint has kept the Sprint Cup Mobile app going that offers live team and officials audio during Sprint Cup Races as well as the radio feed. Unfortunately, many older Sprint phones can no longer access that feed and without a phone upgrade, it's gone.

Over the years, many fans have developed their own unique way of watching the races while using a second screen. That is, another electronic screen or possibly even more that is active during the event. These days, the options are more plentiful than ever before.

Our question today is how do you view the Sprint Cup Series races? What video and audio options do you choose? Do you use a desktop, tablet or smart phone as a second or even a third screen? Do you listen to the audio from the TV during the race? What made you settle for the NASCAR TV "combo-platter" that you chose? We should have some interesting answers as TNT heads into Michigan.

We invite your opinion on this topic. Comments may be moderated prior to posting. Thank you as always for taking the time to stop by The Daly Planet.
Posted by Daly Planet Editor at 1:30 AM 28 comments: