'Twas The Night Before Tweetmas 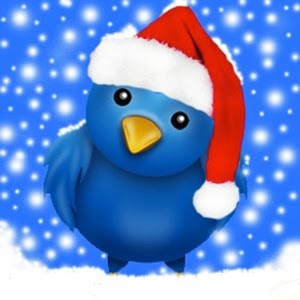 'Twas the night before Tweetmas and all over my phone, not a creature was stirring, not even @TheOrangeCone.

@keselowski and @AJDinger were snug in their beds, while visions of tandem-racing danced in their heads. @Danica in her @GoDaddy t-shirt and I in my @SpeedFreaks cap had just settled in for a @NationwideNNS nap.

When from the #FanZone there arose such a clatter, I ran to @Twitter to see what was the matter. Then to @DirecTV I flew like a flash, clicked on @SPEED but there was nothing but trash!

The glow of my trusty @Sprint EVO phone, gave the luster of #MuscoLighting to objects that shone. When, what to my squinting eyes should appear, but a @safetykleen truck and eight very healthy reindeer.

The driver had a cigar so thick, I knew right away that it wasn't St. Nick. More rapid than @AllWaltrip, his orders they came and he whistled and shouted and called them all by name.

Now Herman! Now Matty! Now Byrnsie and Rick! On Hermie! On X-ray! On Ralph and Dr. Dick! To the top of the ratings, to the top of the heap! Now dash away quick because I need some sleep!

And then, in a twinkling, I heard out the door lots of laughing and yelling that made quite the roar. As I drew in my head and was turning around, through the front door he came right in with a bound.

He was dressed @SPEED casual despite all the racket and his clothes were neat, even the @Mens_Wearhouse suit jacket. A bundle of SWAG he had flung on his back and he looked like @TheChrisMadigan when opening his pack.

His eyes were glazed, his stare not too clear. He smelled like a combo of @Macanudos and @CoorsBeer. His sizable smirk made quite the glint, but the hair on his head had a questionable tint.

The stump of his cigar he held tight in his teeth and the smoke it encircled his head like a wreath. He had a round face and a little round belly that shook when he laughed, like a bowl full of jelly.

He spoke not a word but went straight to his work, put a gift in my stocking then stood up with a jerk. He laughed like a madman and made for the door, his task was complete, there was nothing more.

As he jumped in the truck, he let out a howl. What I found in my stocking...my own crying towel. But I heard him exclaim as he drove out of sight.

Merry Tweetmass to all and to all a good night!

Posted by Daly Planet Editor at 8:33 PM No comments: 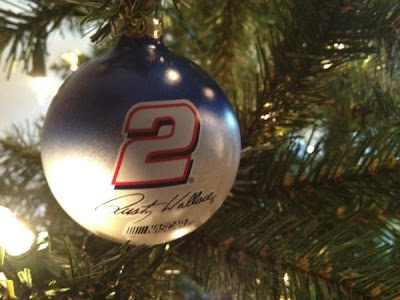 Not everyone can have their own Rusty Wallace tree ornament. So, for those of you who are still in the Christmas spirit we have a little challenge.

If you had one wish to change any part of the NASCAR TV world, what would it be?

This sport is huge on television. All three pro series, qualifying sessions and even practice is shown live. ESPN has over 25 NASCAR TV personalities, FOX and SPEED have even more and TNT still hasn't replaced Lindsay Czarniak.

There have been animated rodents, colored draft trackers and some of the worst musical selections on the planet in the live race telecasts. One network has ten announcers for one race and yet another tops that with eleven.

Let's not forget the battle of the Tech Garage vs the TNT cutaway car vs. Jeff Hammond pointing at stuff. We also have Infield Pit Studios, a Hollywood Hotel and a rotating infield rig.

We have six lines of graphics on the screen at the same time, colors so weird you can't read the driver names and fake pylons inserted on pit road. We see only two cars in the race and after four hours, we only see one finish.

We have ladies married to NASCAR guys, fellows who own NASCAR teams and pit reporters who might really rather be at an IndyCar race. We have Nationwide Series drivers as studio analysts for Sprint Cup Series races and TV roundtables featuring drivers who were actually in the race being discussed.

Across the ten months and thousands of hours of television there has got to be something that you really want to change and have a good reason for changing it. Let us know what that is by clicking the comments button below.

Thanks for stopping by The Daly Planet in the off-season!