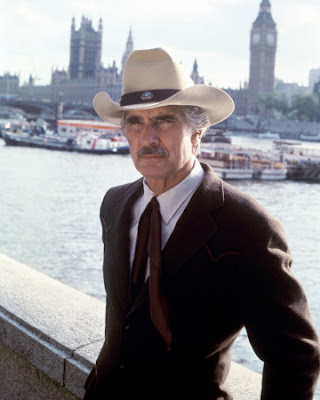 Update: Leaving this post up as the lead for Monday. Lots of folks visit us then. Originally published late Saturday night after the Cup race.

A good cowboy hat goes a long way. In the 1970's, Marshal Sam McCloud made his way from Taos, New Mexico to the mean streets of New York City. He was on special assignment. When Chief Clifford would yell at him, McCloud would always respond calmly with his signature phrase. "There ya go," he would say to his boss. McCloud was a solid hit for NBC.

Texas Motor Speedway has always posed a challenge for FOX. Jeff Hammond gets to wear his own cowboy hat, Darrell Waltrip gets a big stage and Chris Myers looks like a fish out of water. The NASCAR on FOX team repeated this again during the pre-race show Saturday night.

Mike Joy called the race with Waltrip and Larry McReynolds. As the cars came to the starting line, there was an awkward pause. That used to be the time when McReynolds said "Reach up pull those belts tight, DW." Apparently, the powers at FOX put the whammy on McReynolds and his signature phrase for this season.

Once the green flag flew, the emphasis changed to the traditional NASCAR coverage style of FOX. Showing one or two cars on camera was mixed with in-car camera shots with the "natural sound" turned up loud. Over and over again, the pattern was repeated.

Perspective was tough to get between cars on the track. Few aerial shots were used, even going to and coming back from commercial break as what are called "bumpers." This was a shame, as TMS has one of the most beautiful aerial views on the circuit.

Replays are crucial to the FOX coverage. The "hyper-tight" coverage rarely allows for something developing on the speedway to be followed until conclusion. This was the case early in the event when replays had to provide updates on incidents on the track and pit road.

The pit reporters added factual information, but were not integrated into the telecast as other networks do when covering NASCAR. The FOX TV booth is very busy with promo's, sponsor features and Waltrip stories.

It was almost impossible for Joy to update the positions on restarts. Joy worked hard for the first half of the race to keep things in order. It was not easy. Perhaps no one is better at directing traffic in the booth, but Joy is clearly playing second fiddle to Waltrip this season.

A backstretch accident after a restart showed the incredible love affair director Artie Kempner has with in-car cameras this season. At high-speed, Kempner took Mark Martin's in-car camera aimed at the driver live as the accident was in progress.

Martin had no steering and hit the inside wall very hard. He also hit it live on FOX. He also hit where there was no SAFER Barrier. Those of us who have been around for a while got pretty upset over that. NASCAR is about racing, not sensationalism.

While Martin had to sit down in his interview with cowboy/pit reporter Dick Berggren, he was luckily not injured in the accident. This one move may signal a change in the FOX production philosophy. Had Martin been injured, bloody or unconscious the reaction from fans would have been swift.

Years ago, we applauded Mike Joy and the SPEED staff for the way they handled the Michael McDowell accident during TMS qualifying. They waited until McDowell emerged to make any comment and kept the camera wide during the actual accident. Apparently, things have changed.

The last 100 laps were rough from the booth but contained good information from the pit road reporters. Green flag pitstops were tough for Waltrip but Joy kept the order updated for viewers. It fell to McReynolds to update strategy while Waltrip just continually reacted to what was appearing on the TV screen.

FOX has long since refused to peel-back through the field during long green flag runs like the radio coverage. This allows fans of cars not in the top five or even ten to get updates on their favorite driver. With FOX, the only info on teams struggling is provided by the silent scoring ticker at the top of the screen.

The event turned into a gas mileage affair and the coverage followed the stories as they unfolded. Joy's attention to detail got the facts right, despite the fact that Waltrip struggled to keep the pace. It was very clear he was tired toward the end.

The race ended under green with a very non-dramatic ending. Kempner chose to jump around again at the finish line. The scoring ticker never changed to show the winner, there were no headshots or drop-down scoring graphic. Coverage jumped to pit road and then back to the track as Joy called several of the races to the line.

It ended with a thud on TV, but what viewers saw at home seemed to be rather different than what fans at the track saw in the final laps. FOX seemed to be just as out of gas as several of the teams down the stretch.

This post will serve to host your race wrap-up comments on the FOX coverage of the Sprint Cup Series race from the Texas Motor Speedway. To add your TV-related opinion, just click on the comments button below. This is a family-friendly website, please keep that in mind when posting.