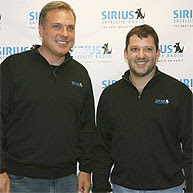 A while back, Tony Stewart and his sidekick Matt Yocum pulled off a pretty amazing night of live TV. You may remember The Daly Planet column entitled "Tony Stewart and HBO are about to make history." Now, slightly over a month since it originally aired live on Pay-Per-View, Tony has pulled-off another TV deal destined to change the racing landscape.

First, let's recap things. Tony owns the Eldora Speedway in Ohio. Its a dirt bullring one half mile in length, and its fast. Tony decided to get some NASCAR buddies to race a charity event on a Wednesday between Cup races. The proceeds would go to the Victory Junction gang camp, and Tony's own charitable foundation.

What started out with Kenny Wallace, Kenny Schrader, and a couple of "guys" has grown into a mid-week media event. This year, Tony got a cast of characters together that you just had to see to believe. Therein lies the problem. The only way to see the original telecast was to psych one's self up to pay the twenty five dollars for one telecast...and hope it was worth it.

The goal was to really make a lot of money for charity, and NASCAR fans (like me) love that kind of thing. To that end, Tony invited a bunch of A-list NASCAR drivers and several NHRA drivers to come out and play. Surprisingly, everyone that was asked said yes to this event. Those in the know understood as the event date drew close that things were going to get interesting in TV land.

There were no million dollar RV's in the infield. There were no covered garages with high-profile crew chiefs. There were no "PR guys" in khaki pants whisking drivers away in golf carts. There was just a bunch of NASCAR guys who could not wipe the grins off their faces waiting to go out and "hot lap" on dirt.

NASCAR on Fox's Producer Pam Miller and Director Artie Kempner lent their services for free to produce the live PPV telecast. Upstairs, in the booth, was Mike Joy, Kyle Petty and Darrell Waltrip. Downstairs, pit road was patrolled by veteran Dick Berggren with Matt Yocum acting as the show's host. The all-star line-ups were not only on the track.

All of a sudden, everything just kind of came together for one night. The weather was great, the track was fast, the cars were sharp looking, and and the strangest things began to happen. People began to see that these carefully "packaged" drivers away from NASCAR were really people who just loved to race. They were, as Wendy Venturini would say, the "real deal."

I am not going to ruin the show for the fans who did not see it the first time, but let me tell you...it was fun. Now, SPEED Channel President Hunter Nickell has swung a deal to re-broadcast the entire event on SPEED. Great idea for the fans. This will serve to put a program out there that does not present these drivers as whiny little millionaires. That sentiment is very popular with some "other" TV networks who try to portray anyone in the sport in a negative light.

The first airing of "The Prelude to the Dream" is on Sunday July 8th at noon Eastern Time. Set your DVR or VCR to record this event, and you will find yourself playing it back again with your friends. For NASCAR fans who have never seen dirt racing, it may come as a shock that this sport exists nationwide and is simply a blast.

As any adult knows, TV likes to imitate itself. Whether it is about law and order or forensics, one hot TV show breeds another. TV most likes to do that when it can make money simply by expanding, or even copying, an existing idea. Right now, Tony and his media company are not releasing the PPV numbers that this telecast drew. I hope that information is released after the show airs on SPEED.

With the success of this project, I am sure we will see more mid-week and off-season events begin to crop-up around racing. Especially with IROC gone, there is a need to show different types of drivers competing for fun with each other. Well, as much fun as these guys can have till the first wheel turns and the race begins. Then, it always gets very interesting. At Eldora, it certainly was.

Big thanks to SPEED Channel, Tony Stewart, and everyone involved in making this re-air happen. Hopefully, SPEED will carefully screen the show and maybe even add-in some production elements to allow new fans to understand the dirt world. This event was lots of fun on TV, but I have already told myself that next year...I'm going.

The Daly Planet welcomes comments from readers. Simply click on the COMMENTS button below, or email editor@thedalyplanet.tv if you wish not to be published. Thanks again for taking the time to stop by.
Posted by Daly Planet Editor at 11:23 PM 5 comments: