Muddy Breakfast With Jeremy On ESPN 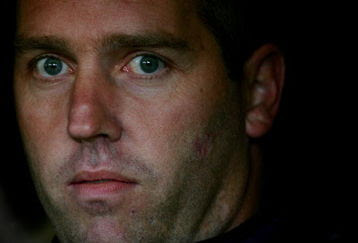 It does not seem like all that long ago when ESPN decided the NASCAR ratings needed a little help. They called in the smear team. Click here for one of the most viewed stories ever on TDP. It is titled "The Two Faces Of ESPN On Display."

One team of ESPN employees outside of the NASCAR bunch took months to create a story that suggested Ron Hornaday was worried about getting older and took steroids in an effort to keep his ride. As we all know now, Hornaday thought he was dying. He had Graves Disease and had yet to be correctly diagnosed.

In a flash, Hornaday's steroid allegations were scrolled on the ESPN network's tickers, placed on SportsCenter as a lead story, pushed on the ESPN.com website and published in ESPN the Magazine. The media blitz was underway.

That same day, Marty Smith headed into the Loudon, NH garage with a camera crew in tow and asked NASCAR personalities about the Hornaday story. What he presented that night to fans on the very same TV network that broke the story was quite different from the original version. Despite the truth being revealed, ESPN had accomplished the goal of creating and distributing a controversial NASCAR story during the Chase.

Sunday morning it will be Jeremy Mayfield talking to ESPN's Outside the Lines show at 9AM ET. This is a Sunday in the heart of the Chase when ESPN once again is longing for better TV ratings. What a coincidence.

Click here for a video and text preview of Mayfield's piece on OTL.

Reporter Steve Delsohn is not involved in NASCAR, but he will present the Mayfield story. Delsohn is a West Coast reporter for OTL and a veteran author. The NASCAR experience will be provided by Ryan McGee, a former executive at the NASCAR Media Group and now a full time reporter for ESPN the Magazine. He will be a live guest. His perspective should be interesting.

Each story has to have a "hook." Here is what ESPN offered in a media release that was re-published across the Internet. See if you can tell what they will be emphasizing.

"You use me as an example to let everybody know who may have already tested positive for marijuana, cocaine or whatever, that they haven’t got anybody for, and it puts the fear of God in everybody in the whole sport. I was a good example, a good pawn who wasn’t going to cost them any money at all. I was worth more to them as a failed drug test then I am as a driver, owner for my own team." (Mayfield quote in release)

There is no clear-cut reason given as to why Mayfield is on ESPN. His new high-profile attorney Mark Geragos was not even in the picture when this story was produced for OTL. Mayfield's race team is gone, his career is gone and his voice is falling on mostly deaf ears.

If ESPN has a legitimate reason for this report, it will hopefully be explained. If this entire thing has been packaged to drive TV ratings by suggesting that "marquee drivers" are taking drugs, then the fan backlash is going to be swift.

Either way, there are a lot of us who will be having breakfast with Jeremy. One thing is for certain. Mud will be on the menu.

TDP welcomes your comments on this topic before, during and after the OTL program. To add your opinion, just click on the comments button below. This is a family-friendly website, please keep that in mind when posting. Thanks for taking the time to stop by, this is going to be a very interesting topic.
Posted by Daly Planet Editor at 10:00 PM 26 comments: 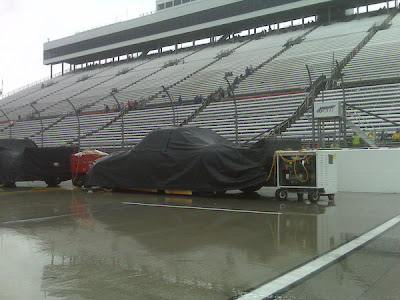 Update: Both NASCAR races are live at the same time, we are using the comments section of this post to update both.

The rain delays at Martinsville, VA began with Sprint Cup practice and will continue with the Camping World Truck Series. SPEED is scheduled for the pre-race at 12:30PM and the live race thirty minutes later.

Krista Voda is going to start the day with The Setup and then we will see what SPEED decides to do when the race is delayed. Rick Allen, Phil Parsons and Michael Waltrip are waiting to call the race. Adam Alexander and Ray Dunlap are the pit reporters.

Martinsville is a great track for the trucks with good close racing and lots of double-file runs through the corners. SPEED keep the coverage simple and works hard to keep the perspective ahead of the racing.

SPEED has no live programming today after the scheduled truck race, so the network will have a window until sunset to stay available and get it in. We will continually update the status of the event in the comments section and on the front page.

This post will serve to host your comments on the TV coverage of the Camping World Truck Series from Martinsville. To add your TV-related opinion, just click on the comments button below. This is a family-friendly website, please keep that in mind when posting. Thanks for dropping by.

Thanks to ESPN's Ryan McGee for the picture.
Posted by Daly Planet Editor at 11:35 AM 350 comments: 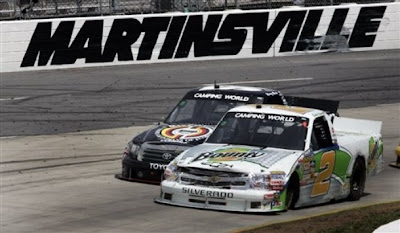 This is a family-friendly website, please keep that in mind when posting. Thanks again for taking the time to stop by, hope to see you Saturday afternoon.
Posted by Daly Planet Editor at 12:05 AM 15 comments: