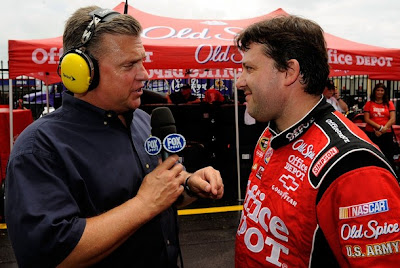 Once veteran broadcaster Mike Joy ends his NASCAR season, Steve Byrnes steps into the play-by-play position for the SPEED coverage of Sprint Cup Series practice and qualifying sessions. It seems only fitting that Byrnes gets to stand in Joy's footprints once Digger and friends have left the scene.

Byrnes has been around in the sport a long time, as his Wiki page will attest. He and I have in common stints at the old Sunbelt Video in Charlotte, NC. That club also includes Bill Weber, Randy Pemberton, Ned Jarrett and countless NASCAR TV production folks.

Friday, Byrnes will be "the show" on SPEED as the network launches a full day of coverage from Loudon, NH. After John Roberts warms-up the crowd with NASCAR Live at 11:30AM, Byrnes starts his day at noon with Sprint Cup Series practice.

As usual, Byrnes will be joined by Jeff Hammond and Larry McReynolds. This trio has fun and keeps things in a healthy perspective during the SPEED coverage. Hammond is a very different person when free from the Hollywood Hotel and McReynolds continues to be the hardest working TV guy in NASCAR by far.

The big show is on the air at 3PM with Sprint Cup Series qualifying. Once again, Byrnes will be anchoring the coverage. SPEED has perfected the art of covering qualifying by giving each car TV time and covering each run equally. McReynolds is especially good at helping viewers to understand what each team is trying to accomplish and where they stand on qualifying efforts throughout the season.

Where the overall production really shines is during "knockout Cup qualifying." For lack of a better term, the go-or-go-home cars battle it out at the end of the session. Sometimes, these are legitimate teams trying to make the field and run the race. Sometimes, the bottom-feeders are battling strictly for start-and-park dollars.

Byrnes caps the night by anchoring Trackside on SPEED at 7PM. Once again, McReynolds and Hammond are along for the ride. Elliott Sadler is the fourth panelist and this week's guests are Matt Kenseth and Brian Vickers. This show comes from the SPEED Stage at each Sprint Cup Series track and attracts a darn good crowd.

That puts Byrnes at right about the six or seven hour mark in on-air presence for Friday alone. After that long day, he gets to return on Saturday and start SPEED's coverage off once again with Sprint Cup Series practice at 9AM ET.

This post will serve to host your TV-related comments on the Friday coverage on SPEED from Loudon, NH. To add your opinion, just click the comments button below. This is a family-friendly website, please keep that in mind when posting.

Thank you for taking the time to stop by The Daly Planet.
Posted by Daly Planet Editor at 9:00 AM 25 comments: