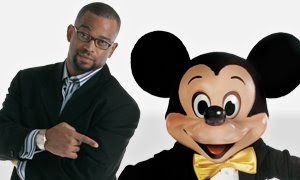 ESPN the Weekend is in full swing down in Orlando, FL at Disney's Hollywood Studios theme park. Click here for more info on the festivities.

That leaves the NASCAR action from Las Vegas all to SPEED on Friday. The network hosts both Nationwide and Sprint Cup Series with the Trackside program rounding-out the evening.

It will be John Roberts kicking things off at 1PM ET with NASCAR Live. He will be joined by Randy Pemberton and Bob Dillner as reporters. This show offers the stories of the day before the cars get on the track for the afternoon.

Next up will be Nationwide Series practice at 1:30pm. Steve Byrnes will call the action with Hermie Sadler and Jeff Hammond alongside. While this series has the races telecast by ESPN, the SPEED team offers a very professional and quite watchable practice telecast.

At 3PM the Sprint Cup Series cars take to the track for practice. This brings the NASCAR on Fox crew to the table as Mike Joy, Darrell Waltrip and Larry McReynolds take over. This crew will remain to watch the Nationwide Series final practice at 4:30PM as well.

ESPN2 will sneak-in a NASCAR Now program at 6PM hosted by Nicole Manske. Updates will be provided from Las Vegas and the news will be reviewed.

All hands will be on deck at 6:30PM as the full NASCAR on Fox crew present live Sprint Cup Series qualifying on SPEED. There are going to be some very good stories to follow in this session, which could prove to be the most interesting of the young season.

Names like Max Papis, Todd Bodine, Jeremy Mayfield and Brad Keselowski will be trying to make the field. There are 51 cars set to make a qualifying attempt.

The night will be finished with Trackside at 8:30PM. Jeff Hammond, Darrell Waltrip and Larry McReynolds will scurry down to join host Steve Byrnes for the show. Guests include Scott Riggs, Jamie McMurray, and Jeremy Mayfield. Bruton Smith's son Marcus, who replaced Humpy Wheeler at Lowe's Motor Speedway will also appear.

SPEED has been doing an excellent job at both practice and qualifying coverage since the new NASCAR TV contract began in 2007. Having a consistent day where all the action is on one network serves the fans quite well and also allows the ongoing stories to be paid-off regardless of when they are ready to be reported. This Friday should be no different.

Just a quick note: Randy LaJoie was flying solo as the expert on the Thursday edition of NASCAR Now on ESPN2. This is the first time we have seen LaJoie in this role which he handled quite well. It may not only be Ricky Craven who finds his role expanding with this TV series.

This post will serve to host your comments about the topics and programs featured above. To add your TV-related opinion, just click on the comments button.

This is a family-friendly website, no foul language or hateful speech please. Comments may be moderated prior to posting. Thanks and have a great Friday.
Posted by Daly Planet Editor at 8:00 PM 27 comments: