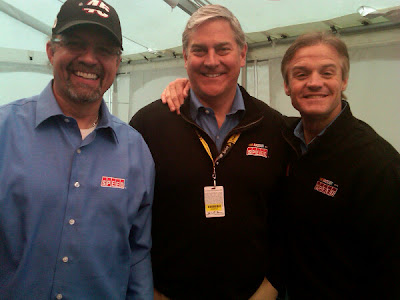 It's the time of the year when TV changes are announced and SPEED did just that following a staff get together on Monday night in Charlotte, NC.

New network president Scott Ackerson said in the gathering that the network was going to increase "storytelling" and ramp-up production for this season. SPEED originates the NASCAR studio shows from Charlotte and handles the Camping World Truck Series races, but employs the NASCAR Media Group to produce the other programs from the race tracks.

Ackerson took over at SPEED on January 1 after coming to Charlotte from FOX Sports in Los Angeles, CA. A studio producer and veteran executive, Ackerson worked at ESPN prior to FOX and has a solid reputation as a people person and a "TV guy."

Changes in assignments announced by SPEED started with Jeff Hammond leaving the Trackside series. Now completely changed from the hardcore racing show of the past into an entertainment-style program, that was perhaps a good move.

Krista Voda will once again step into the host role with Kyle Petty and Rutledge Wood as the panelists. You may remember SPEED tried Wood in the host role late last season. Voda has also been in the host role for this series before and it did not click.

Love her or hate her, Marianela Pereyra is back as the show's reporter. Another LA person, Pereyra is the star of the World Poker Tour programs this season and frankly it is surprising that she is back on the NASCAR beat. The hot rumor was that former Miss Sprint Cup Monica Palumbo would fill the reporter role.

SPEED has also decided to split the Trackside series into two shows this season. As logistics and schedules permit, there will be a thirty-minute show on Friday night and another on Saturday. Obviously, the issue is the Saturday night Cup races.

Wood will also appear on the RaceDay show that remains as the network's Sprint Cup Series preview program. John Roberts, Kyle Petty and Kenny Wallace are the trio seen above and they return as the core of the show. This year, they will be joined by Larry McReynolds on the stage. A crew chief perspective should be good for the series.

Veteran RaceDay reporter Hermie Sadler is not returning for this season. He has been replaced by former pit crew coach and now RaceHub regular Matt Clark. Wood and the true star of the show, Wendy Venturini, are the other two reporters.

While Hammond might have left Trackside, he has joined the NASCAR Performance series. In the past, the show was hosted by McReynolds. This season, SPEED has added RaceHub reporter Danielle Trotta as the host with McReynolds, Hammond and Chad Knaus on the panel. While produced last season at the NASCAR Hall of Fame, this year the show moves into the SPEED studios.

One of the positive changes for this season is the commitment of SPEED to showing the NASCAR Victory Lane show immediately after the TV network carrying the actual race goes off the air. This puts an hour of conversation, interviews and highlights on the air after every Sprint Cup Series telecast, including the Saturday night races.

While the SPEED information did not mention it specifically, the Victory Lane show is Roberts hosting with Petty and Wallace. When Wallace has been away driving in the stand-alone Nationwide Series races, it has been McReynolds or Hammond filling that void.

Additional information from SPEED confirmed that the SpeedCenter show will return. This was the pet project of Patti Wheeler, the former head of programming and production at the network who resigned suddenly in December. The series is the only one that offers additional motorsports news, highlights and interviews on SPEED.

Last year it was Adam Alexander who struggled through the season as host of SpeedCenter. The depth of the show's coverage was rough for Alexander, who is limited in his motorsports knowledge. The SPEED release did not mention how many episodes of the show will appear on the weekends or who will participate as the host. Ray Evernham also appeared to talk NASCAR last season, but he was also not mentioned in the SPEED release.

The final topic is Wind Tunnel. I have long advocated a second all-NASCAR version of the program at 8PM on Monday nights. With all the different motorsports topics on Dave Despain's agenda on Sundays it's tough to get a thorough discussion on NASCAR topics done with the fans.

Needless to say, once again this concept did not fly and Despain will be returning for his show on Sunday nights only. The studio will get an update and the show will have a new look. Fans should remember this is the only show on SPEED that has an Internet-only thirty minute webcast after the TV hour is done.

That's the basic scoop about SPEED in 2012 where NASCAR is concerned. No doubt on Tuesday there will be some things added and others clarified with all the information we tried to get across. Those items will be updated right on this post.

We welcome your comments on any of the topics above. To add your opinion, just click on the comments button below. Thank you for taking the time to stop by The Daly Planet.