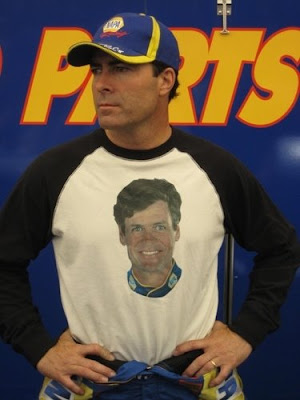 Life is a lot better for the gang producing This Week in NASCAR on SPEED Monday nights. It took a while, but SPEED has solved the TV problems that included audio issues, bad lighting and amateurish make-up.

Finally getting that "TV stuff" out of the way has resulted in some fun shows. Monday, it was the Chad and Mikey comedy tag-team back on the air. This season, Knaus and Waltrip have both been making NASCAR news and luckily for the program, that news is almost always good.

While Jeff Gordon winning after a long drought was the lead story, not far behind was the amazing recovery of the Jimmie Johnson team from running poorly to finishing second. Knaus once again was worth his weight in gold for this show. Waltrip chimed-in with his driver, David Reutimann, starting from the pole and having a great season.

Steve Byrnes has been good-naturedly trying to prod Knaus to share some team secrets, but to no avail. This trio has proven to be the right combination for this program. The only thing missing, for old school fans, is the wisdom and wit of someone like Kenny Schrader. The yin and yang of Knaus and Waltrip makes for good TV, but perhaps having a third voice next season might add a new dimension to the program.

Content is king these days and for NASCAR fans the choices seem to be almost endless. TWIN is battling the NASCAR websites, Twitter and amateur blogs who have access to race video and operate without the issues of footage rights or professional accountability.

Byrnes has taken the role of leading the discussion and his choices of topics normally result in good information coming from Waltrip and Knaus. Each of these two personalities have a wealth of information for very different reasons.

The analytical Knaus may be the top crew chief in NASCAR and Waltrip has put in his time with a long history in the sport and a very diverse journey. Aside from the race-related info, the program also offers a very human glimpse into the reality of a NASCAR life and the very different kind of lifestyle that results.

At the beginning of the year, TDP readers lobbied for a format change in the show and were ultimately rewarded by the SPEED executives. Waltrip has recently been lobbying for more airtime for the wonderfully edited features from The NASCAR Media Group that combine the TV, radio, scanner and natural sound of the races with all the best footage. Next Monday, he gets his wish.

During the Sprint Cup off-week, TWIN will be on at 8PM with the best NASCAR Media Group features from this season. From the dramatic to the hilarious, this is the type of content that SPEED will hopefully present as a weekly series before too long. With all the drama of an NFL Films-style presentation, these features really give the behind-the-scenes peek that many fans love.

The heart of the Sprint Cup season is just around the corner and TWIN has once again put itself in a strong position as a fun and entertaining Monday night NASCAR TV series.

As we approach the break, what are your thoughts on TWIN this season? To add your opinion, just click on the comments button below. This is a family-friendly website, please keep that in mind when posting.

Thank you for taking the time to stop by The Daly Planet.
Posted by Daly Planet Editor at 7:00 AM 31 comments: