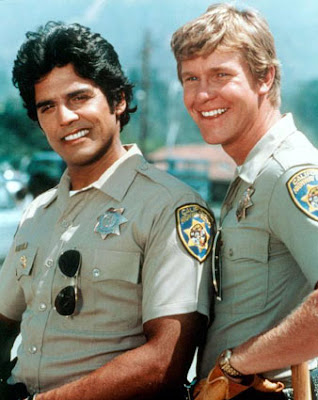 Ponch and John had something in common while patrolling the highways of California. They both looked good. In Hollywood, that certainly counts for a lot. On the racetrack, it's all about performance.

A drizzle made for dreary weather at the Auto Club Speedway. The Hollywood Hotel was the home for Chris Myers, Darrell Waltrip and Jeff Hammond. The pre-race show was a mix of topics that somehow always try to tie-in to Hollywood.

The wide racetrack made for lots of green flag racing and limited passing once the field was stretched out. Denny Hamlin went out of the race after an engine problem and was interviewed quickly.

FOX made good pictures and had no technical problems. The telecast started in typical FOX style with tight shots and in-car cameras as the primary video. With about 60 laps to go, wideshots began to be used to show the intervals between cars.

The network was in commercial for the first round of green flag pitstops. This was surprising given that radio traffic indicated when the teams would begin to pit. The pit reporters were good with information and often provided a news item when the telecast slowed down.

FOX seemed confused in terms of what to cover on the track and often followed cars in the lead without providing a field recap of moving back to tell the stories of other teams. Eventually, Waltrip and McReynolds kind of ran out of things to say about the same few cars being covered.

The way that radio solves the problem of a boring race is by going back and telling the stories of the teams that are struggling or coming back from adversity. FOX has a problem doing that in any kind of coordinated manner. It is just not a part of the telecasts and has never been.

A restart with less than 10 laps to go jump-started the telecast and allowed it to end with some actual racing. Joy brought the race home and it was thankfully done.

Update: I am being flooded with email about fans not seeing their driver finish the race. FOX has consistently shown only the winner cross the finish line this season. Feel free to leave a comment referencing that topic below, but it does not appear that this is going to change.

This post serves to host your post-race wrap-up comments on the FOX telecast. To add your TV-related comments, just click on the comments button below. This is a family-friendly website, please keep that in mind when posting. Thank you for taking the time to stop by The Daly Planet.