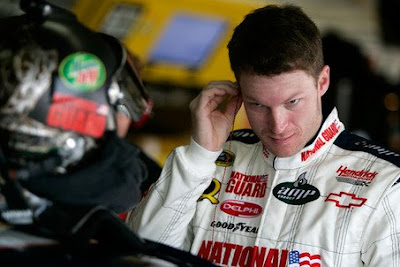 On Wednesday, NASCAR fans were checking the remote when they saw Robin Miller appearing on ESPN2 while wearing a SPEED TV t-shirt. Thursday, the TV weirdness continued on NASCAR Now as during one of the biggest stories of the season, ESPN2 had a meltdown. More on that later.

Host Nicole Manske had led a program that featured Rick Hendrick on the phone, soundbites from Dale Earnhardt Jr. and a news update from Marty Smith. All of this was in reference to the changes at Hendrick Motorsports on the #88 team. Smith had strong comments from his interview with Lance McGrew, the Hendrick employee tagged to take over the team.

Manske then brought out two of ESPN's biggest guns in Ray Evernham and Dale Jarrett. Evernham was clear in reminding viewers that almost everyone knew this was coming after the most recent race. Manske actually asked Evernham what advice he gave Hendrick on this issue. It was smart of Evernham to quietly remind her things were usually the other way around.

Evernham responded to the possibility of his involvement at Hendrick as a future #88 crew chief with a big no. Times had changed, he said and the crew chief role was not one that interested him regardless of the team. Evernham left the door cracked by saying if he ever did return in another role, he would like it to be for Hendrick.

Jarrett was his diplomatic self in speaking of Earnhardt as a talented driver who simply needed to change his style and let his team fall in line with the other successful Hendrick teams. Saying Junior needed to focus, Jarrett also suggested that a non-family member challenging Junior to get the job done might do the trick.

At the end of the Jarrett segment, Manske teased the fact that the show would return with an edited piece on the rocky road this season of Earnhardt and Eury. This would be a very interesting video as the season has certainly resulted in some memorable conversations on the #88 team radio. Unfortunately, that never happened.

ESPN2 suddenly ran over five minutes of commercials and promos. Something was very wrong at NASCAR Now.

Coming out of this monster break, the correct program segment was not being shown. The salty language of Junior and Tony Jr. was nowhere to be found. Things had just moved from bad to worse.

It was quickly apparent that the segment of NASCAR Now being aired was the final one. Viewers watched Manske get final comments from Evernham and Jarrett. Then, she signed-off and walked quietly off the set. The show was over. There was only one problem.

There was still over six minutes left in the thirty minutes of NASCAR Now. Quickly, ESPN re-ran most of the previous commercial exactly as it had aired. This is the worst situation for a TV network.

The solution was a simple one. On what may prove to be one of the biggest NASCAR news days of the year, ESPN2 introduced NASCAR fans to Trey Wingo. It was time for NFL Live four minutes earlier than scheduled.

The ESPN2 automated promo graphic at the bottom of the screen told NASCAR fans that this NFL show was coming up next. No, it was on the air right now.

Luckily, this technical mess happened after the good comments from Hendrick, Smith, Evernham and Jarrett. The only thing lost was the show's big feature piece recapping this season. Manske was solid again despite her rather strange question to Evernham about giving advice to Hendrick.

For West Coast viewers, the program re-airs at 11:30PM Pacific Time and there is little doubt the problems will be fixed. Perhaps, Manske will choose to play the feature on the Friday version of NASCAR Now that airs at 6:30PM ET for those of us on the East Coast who missed it. Either way, the show had some good conversation and reporting, it just mixed with some untimely technical problems.

TDP welcomes your comments on these topics. To add your TV-related opinion, just click on the comments button below. This is a family-friendly website, please keep that in mind when posting. Thanks for taking the time to stop by.
Posted by Daly Planet Editor at 9:00 AM 34 comments: