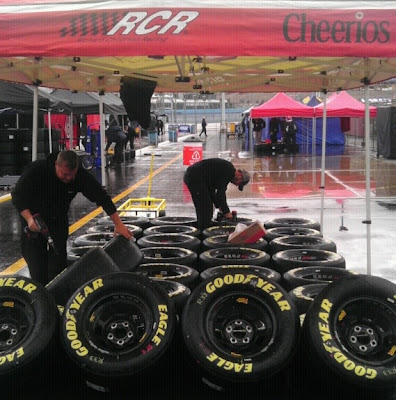 It was a rough Saturday for ESPN in Phoenix. College football ran 35 minutes longer than scheduled, covering the entire Nationwide Series pre-race show. As this was the next to last race, you would think ESPN would have some plans in place, but nothing happened. ESPN2 joined shortly before the National Anthem and the race was on.

After Sam Hornish won, ESPN2 switched immediately to a college football game without any interviews, including the winner. Announcer Marty Reid told viewers that the entire post-race would be done on ESPNEWS. Eventually, the Hornish interview and one other was shown. It was not a stellar day for the only NNS TV partner.

Today, ESPN faces another challenge. It rained hard during the night and the weather forecast continues to call for an 80% chance of rain through 4PM. PIR has lights, so it could be a very long day on the air. There are no live program conflicts on ESPN tonight, so the race window can continue until NASCAR postpones until Monday.

Nicole Briscoe lost her pre-race show yesterday, but hosts an hour today with Rusty Wallace and Brad Daugherty. Rusty's son Steven had quite a moment in the NNS race on Saturday. It should be interesting to see if that race is recapped.

Allen Bestwick is once again teamed with Dale Jarrett and Andy Petree. The single-groove track widened out in the Nationwide Series race to allow for passing and strategy. After the rain Saturday night, the newly-repaved track should be the topic of conversation.

Jamie Little, Dr. Jerry Punch, Dave Burns and Vince Welch are on pit road. Tim Brewer is in the Tech Garage. Little had a rough outing Saturday, including a memorable interview with Jason Leffler. Punch has changed gears and tries to work his own agenda into interviews. Joe Gibbs and Elliott Sadler come to mind.

ESPN's producer and director made a decision to shrink the PIR Nationwide Series pictures sent to fans to a single car at a time. If there were two cars in the picture, it was tolerated. ESPN missed every incident but one and used replays to explain the happenings on the track.

If this approach is taken to the longer Cup race today, it may simply prove to be a reason for sports fans to switch to NFL games. Instead of selling the racing action, ESPN has followed the "storytelling" script where announcers talk overtop of the action as if they are watching a movie. It's very strange.

The new dogleg on the backstretch has given drivers the option of cutting low and then sliding up in front of those still on the track. This angle will have to be covered on every lap and it will be tough to do. Even getting the right replay angles recorded will be a challenge.

Once again ESPN has to cover the Chase, the race and Kyle Busch. In his first race back, Busch is racing without the M&M's sponsorship. The Chase now features only two participants and the race is absolutely anyone's to take.

Throw in the rain delays and this is going to be a very interesting race telecast. This post will serve to host your comments on the ESPN coverage from PIR today. To add your TV-related opinion, just click the comments button. Thanks for stopping by.