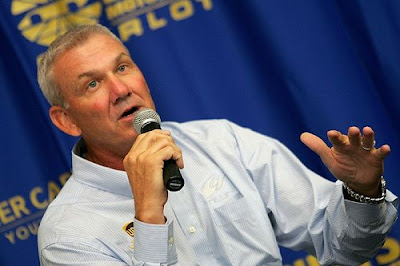 The Nationwide Series has been racing since February. Like the trucks on SPEED, the Nationwide Series enjoys a TV home on the ESPN networks during the season. All the way through Homestead in November, fans know where to go to watch Kyle and Carl take on the rest of the field.

This Saturday, ESPN2 is going to offer something TDP discussed earlier in the week. Click here for that column. The topic drew a lot of comments and emails. Instead of Marty Reid calling the race, ESPN will have four NASCAR analysts who will talk among themselves while the race is in progress.

Rusty Wallace, Ray Evernham and Andy Petree are on the list. These three will be upstairs in the announce booth. Down in the Tech Garage will be Tim Brewer. Also on hand will be Allen Bestwick in the Infield Pit Center in his normal role of hosting the pre-race show and the telecast in general.

While all of those personalities are certainly going to play a key role in this TV experiment, there is little doubt who will be getting the most attention. Front and center on Saturday afternoon will be Dale Jarrett.

Working with the low-key Jerry Punch on the ESPN race telecasts forced Jarrett to develop his own play-by-play skills rather quickly. Someone had to provide the excitement and it was clearly not going to be Punch. Jarrett and his normal broadcast partner Petree have been forced to jump in when on-air silence is the only other option.

This season, ESPN assigned Reid to the Nationwide Series races down the stretch. He stepped in to relieve Punch of those duties. Although Reid made a great first impression in only a handful of events, he is taking this weekend off.

Even with Reid absent someone has to call the laps, the cars, and describe the action on the track. The mechanics of TV include transitioning to the pit reporters, to Brewer in the Tech Garage and to the frequent TV commercials. Indications are that Jarrett will carry the load.

As sports TV has become more flexible in the new media and Internet age, the traditional on-air roles have become blurred. Guys like Jarrett can move from the analyst position on a high-profile race to a studio role for Monday's NASCAR Now review show and then appear on the ESPNEWS network to discuss NASCAR topics in the news.

Perhaps, Jarrett and Evernham have proven to be the best when it comes to multiple roles for ESPN. Both have moved seamlessly through whatever tasks and assignments have been asked of them and yet continue to maintain a very distinct personality on the air.

In addition to the race analysis and general comments about NASCAR, both Jarrett and Evernham have been passionately outspoken about the current Sprint Cup Series car and the fact that changes continue to be needed for the overall good of the sport.

While Evernham has seen limited action this season in the broadcast booth at the tracks, Jarrett has been continuing his exposure as the featured face of NASCAR on ESPN across the board. Saturday, he will be asked to expand his experiences again and be the leader of the pack when it comes to coordinating the ongoing conversation among the four analysts and four pit road reporters.

While the Producer and Director may be talking in a lot of different ears during the live race, there is little doubt that a point person is going to emerge and that will be Jarrett. Like other top TV professionals, Jarrett took the time and invested the effort needed to learn his new role in front of the camera.

One of the top tennis announcers on TV works for ESPN and that is Cliff Drysdale. "Mr. Cliff" as he is called transitioned from the analyst side of the microphone to the host and play-by-play position over time. Drysdale is an excellent example of what may be in Jarrett's future.

One well-spoken individual with credibility in the sport and a good set of TV skills may be just what jumps off the page when Saturday's little TV experiment is done. My guess is that person is going to be Jarrett.

Bestwick begins the pre-race show on ESPN2 at 3PM and the "Backseat Drivers" special edition of the Nationwide Series race is next at 3:30PM. SPEED starts the day with Nationwide Series qualifying at 10:30AM and then both sessions of the final Sprint Cup practice at 12:30PM.

TDP will be live blogging the Nationwide Series telecast beginning at 2:30PM. Please join us. In the meantime, please feel free to leave us your opinion and prediction on Saturday's "Backseat Drivers" telecast. To add your comment, just click on the comments button below.

This is a family-friendly website, please keep that in mind when posting. Thanks for taking the time to stop by The Daly Planet.
Posted by Daly Planet Editor at 11:00 PM 24 comments: 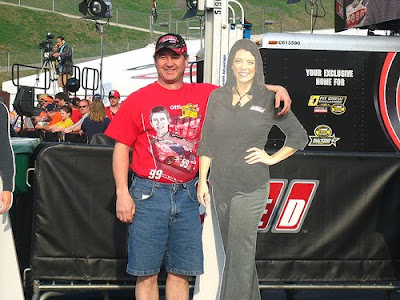 Just set it and forget it. SPEED rules the NASCAR TV on Friday from noon ET through 8PM. The network will handle all the on-track activity at MIS.

The dynamic trio for SPEED will be Steve Byrnes, Jeff Hammond and Larry McReynolds. These three have been friends for a very long time and their comfort level with each other translates quite well to TV.

Bob Dillner and Wendy Venturini will be doing a lot of walking as they spend seven hours tracking down the Sprint Cup and Nationwide stories from the garage area. Venturini continues to grow her fan base while Dillner is usually the last man out of the garage area after he provides updates for Sunday night's SPEED Report.

3:30PM brings live qualifying for the Cup guys and on the big track at MIS, this is perhaps not the most exciting TV programming. Luckily, McReynolds usually has more than enough details and tidbits on each team to help NASCAR fans pass the time on the air.

The on-track action is capped at 5PM when the Nationwide Series returns for the late practice session. This could be a very interesting practice with lots of rubber down on the track and cooler temps making for some memorable speed and action.

Trackside ends the night for SPEED. Byrnes, McReynolds, Hammond and Elliott Sadler will welcome guests Joey Logano and Justin Allgaier. Kasey Kahne may also possibly be stopping by to say hello. This is always a fast-paced hour but SPEED is still having problems dealing with the rowdy crowds during the interview segments. Really tough to hear what is going on sometimes, an issue SPEED will no doubt have to address for next season.

ESPN2 makes its only Friday contribution with NASCAR Now at 9PM. This show is on the air later than normal due to live tennis. Mike Massaro is the host for this program that will recap the MIS action and preview the Nationwide race on Saturday.

This post will host your comments as we go through the NASCAR TV Friday. It should be fun to watch SPEED cover MIS exclusively. The weather looks good and there are some great stories developing both on and off the track for the network to cover.

To add your TV-related comments, just click on the comments button below. This is a family-friendly website, please keep that in mind when posting. Thanks for taking the time to stop by The Daly Planet.
Posted by Daly Planet Editor at 7:30 AM 30 comments: