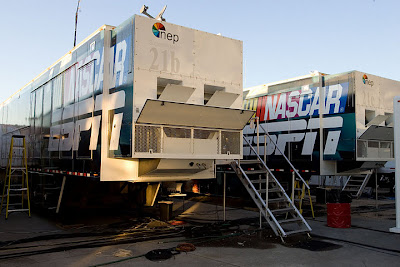 The ESPN TV team continued coverage of the Sprint Cup Series this season with the Sunday night race from the Atlanta Motor Speedway.

The reality check for viewers was the combination of the lack of racing action and the typical TV style of ESPN. Without searching for stories the telecast had lots of two-car camera shots with Bestwick and company trying to keep the conversation flowing. It was not an easy task.

College football again affected the pre-race show, as it did for the Nationwide Series telecast on Saturday. This was the final weekend without NFL regular season games, so a college game on Sunday was on the schedule. Luckily, it was a one-sided affair and the NASCAR Countdown show was started on the ESPNEWS network.

Once the actual race started, complaints flowed in from fans about a wide variety of issues with the NASCAR.com online pay services. No team scanners, no telemetry and a large time lag made the fans line-up at the virtual complaint window. Eventually, the bugs were sorted out but this type of situation has been all too common.

During the race, several cautions for debris were thrown and ESPN did not even attempt to show the debris on-camera. After the Saturday incident toward the finish of the Nationwide Series race with Brad Keselowski, it seemed strange not to have TV really focus on making sure to document for the TV viewers what caused the racing to be stopped.

Green flag pitstops normally are presented in a split-screen video box so viewers can continue to see the leaders racing at speed while also viewing the key cars pitting. This was not done consistently, but got better as the race progressed. The same was true for showing full-screen replays of passing or other incidents while the race itself was under green. These needed the split-screen approach.

With long green flag runs, it is tough to integrate the Infield Pit Studio crew and give them a continuing role in the telecast. There was just not too much to discuss that had not already been covered from the TV booth. Trying to do that in this race made for some awkward moments.

ESPN does not start split-screen commercials until the final ten Chase races. This is one of the best examples of a race that needed them. Long green flag runs meant missing substantive time in the race with every commercial. With the heavy commercial load in Sprint Cup Series races, fans missed a lot of laps.

The good news for ESPN is that the mix of on-air personalities is the best ever heading into the Chase. Ray Evernham gets Rusty Wallace fired up, while Bestwick and Briscoe are very good at keeping order and directing traffic. Petree and Jarrett work well together and finally Jarrett is speaking out and assuming his role as the lead analyst.

The bad news is the continuing inability of the producer and director to grasp what is going on in the race and relate that to the fans. This season there is no "script," but rather a mind-numbing pattern of tight camera shots as if TV viewers are purposefully being kept from seeing the actual racing on the track. It makes little sense and forces key issues in the race to be offered through replays.

It has been made clear that this style of production is what ESPN wants and fans have to accept it. The problem is that the post-race stories reported by the pit road reporters are often the ones missed during the live telecast. Stepping back, both figuratively and literally, for a better perspective on the racing would certainly help this effort.

We invite your opinion on the ESPN telecast from Atlanta. Comments may be moderated prior to posting.
Posted by Daly Planet Editor at 11:49 PM 24 comments: 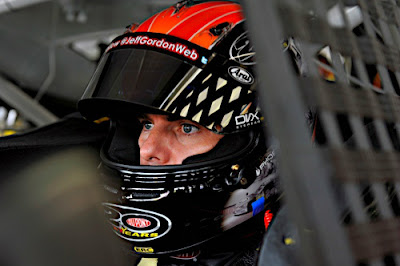 Note: We will be hosting a live stream on Twitter during the Sprint Cup Series race from Atlanta using the #TDP1 hashtag. Search it to see our conversations, add it to your tweets to be included. There will be a post here immediately after the checkered flag for your TV post-race wrap up.

TDP will return next week with new columns. Thanks for your patience this week. There are a lot of ongoing TV and media stories that we will attempt to update. Thanks to Jeff Gordon PR for the picture via Twitter.
Posted by Daly Planet Editor at 4:22 PM 2 comments: