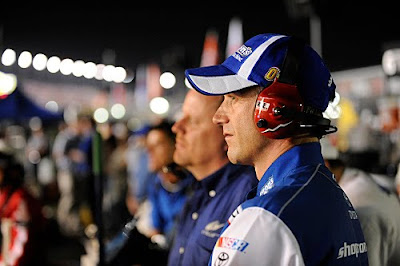 We rarely deal with entertainment television here at TDP, but this time we are going to make an exception. Sunday night's episode of CBS's Undercover Boss had a NASCAR theme that got a lot of people talking.

Never having seen the show before, I assumed that the TV journey NASCAR Chief Marketing Officer Steve Phelps took was a normal one. A designated executive from a large corporation takes a turn doing various jobs of lower-level employees. It seems like a simple concept.

Phelps mingled with a Sprint Cup Series pit crew, a sign painter and some folks running a concession stand. Along the way, despite the presence of camera crews, the idea was to make some conversation and absorb a little of the workplace reality.

In this episode, the issues were the sometimes unstable life of a pit crew member, the serious illness of a child and the financial struggles of good people. All the folks involved were outstanding examples of Americans working hard in a tough economy. It's a very workable TV formula.

Undercover Boss is always a ratings winner. Sunday over ten million viewers watched. That is more than double the audience for Sprint Cup Series Chase races so far this season.

As with all subjective topics, there are two sides. On the positive side, NASCAR got lots of great exposure from this program. Also, Phelps rose to the challenge and seemed to be a good conversationalist. He drew some interesting details from the participants.

On the other side of the coin, some folks emailed to say not one actual NASCAR employee was involved in the program. Top company executives Brian France and Mike Helton were not present at the end of the show, nor did they offer reactions to Phelps and his journey.

NASCAR has a wide variety of employees. There are administrative, operational and even media-related jobs that are done everyday. From the very visible inspectors in the garage to NASCAR-owned MRN radio broadcasts, NASCAR is nothing if not diverse.

Some critics felt NASCAR held itself at arms length again and never let Phelps crack the reality of being an actual employee. Instead, the stories selected well in advance each had a theme that ultimately painted the sport in a good light.

Never having seen the show, I understand both angles. It would have been fun to see Phelps taking race cars through track inspection, holding a wireless TV transmitter for a pit road reporter or even taking tickets at the Hall of Fame.

This type of entertainment TV show is scripted to send a message at the end. In this program, the message was certainly intended to be that NASCAR understands and cares for the issues in the lives of those involved in the sport in some fashion.

Were you one of the millions who watched this program? Help us out with your opinion about the various aspects of what was discussed above. Did NASCAR come away with a better image and positive spin or did the fact that Phelps interacted with no actual employees of his own company bother you as a viewer?

To add your comments on this topic, just click on the comments button below. This is a family-friendly website, please keep that in mind when posting. Thanks for taking the time to stop by The Daly Planet.