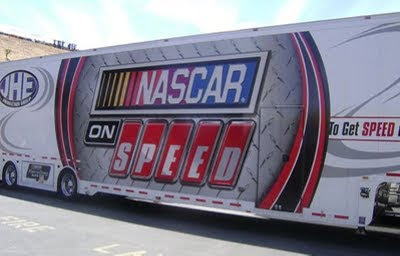 Update: Leaving this as the top story while comments continue. Expect to have more info on the SPEED changes Friday and will update as news becomes available.

Earlier this week we documented the fact that the president and executive vice president of SPEED stepped away from their respective jobs. The network staff is now awaiting word on a new chief executive and the revamping of senior management.

The buzz on the street is that the new head honcho is not a NASCAR person, not a motorsports person and not even a sports TV veteran. Two gentlemen named Randy Freer and Eric Shanks run the FOX Sports Media Group. These two have been deeply involved in changing the dynamic of many FOX Sports offerings and it seems SPEED may be next.

SPEED is clearly the redheaded stepchild of the FOX cable networks. Located in Charlotte, it is a national network that buys most of it's programming from third parties, produces little of its own NASCAR coverage and has never be able to really define itself.

There is absolutely no indication from SPEED that NASCAR content on the network will increase. In fact, the truck series races have been reduced in number and that series, the only one carried from start to finish by SPEED, has never had even a weekly support program.

In the heart of the NASCAR season, SPEED executives moved NASCAR RaceHub out of the fringe of primetime at 7PM and back to one of the worst possible timeslots at 6PM Eastern Time. Suddenly, not only did RaceHub have to go against every local TV station newscast but it also clashed with the final hour of Dave Moody's Sirius Speedway show on SiriusXM Satellite Radio.

Veteran readers of this blog know that the list of programs produced for SPEED by the NASCAR Media Group (NMG) is long. Unfortunately, the list of NMG programs subsequently cancelled by SPEED is almost just as long. This year The Ten and The Day were shows that made a mark, but only a small one.

Once NASCAR got to the banquet week, SPEED bailed on all of the studio-based programming that featured motorsports news, interviews and analysis. NASCAR fans are upset RaceHub is gone in an off-season where the NASCAR news is still going at full steam. Fans of motorsports in general no longer have the new SPEED Center weekend series.

Even good old Dave Despain is gone and while Twitter, Facebook and a bevy of racing websites continue to debate topics from Danica to a safer IndyCar, Dave's voice is silent. Wind Tunnel also left the building.

If SPEED wants to embrace shows like Pumped!, Stuntbusters and Dumbest Stuff on Wheels it is certainly the right of the management. Over the last ten years everything from Texas Roadhouse motorcycle grannies to Michael Waltrip's amateur infield talent show have been on the air. Who can forget the guy in the leather cowboy hat and kilt playing "Low Rider" on the bagpipes?

What has not been on SPEED are the voices from the network's own website who readers have come to know and trust. Writers, reporters and online journalists simply aren't allowed to make the kind of smooth transition between media platforms that we see with ESPN's personalities.

There is no branded "morning show," no kids programming and nothing designed for adult women viewers. Mornings on SPEED are simply a waste of time as are weekday afternoons. What many cable TV networks have worked for years to develop has never been touched by SPEED even as dollars were poured into "lifestyle programming" by the millions.

All of this reality brings us right back to the issue that tops the email for the week. Why does NASCAR not have its own 24 hour cable TV network like so many other professional sports? These days, that question is a good one.

What NASCAR did a while back was finally organize itself so that it sold the TV rights to all the races. It also created a company called NASCAR Images to be the official TV production company of NASCAR. Just like PGA Tour or NBA Productions, NASCAR Images was the group that controlled, archived and then distributed footage of the sport.

NASCAR Images was ultimately rolled inside a bigger organization called the NASCAR Media Group. This was done because NASCAR created a television, radio and digital production center in the new NASCAR Plaza in Charlotte, NC. It seemed at the time that things were being prepared for a cooperative effort with SPEED to become a TV network with additional NASCAR product. Well, nothing could be further from the truth.

The relationship between SPEED and the NASCAR Media Group is not good. SPEED is currently twisting toward becoming even more of a truTV and MTV network clone with over-hyped "lifestyle programming" created by LA-based production companies in the FOX inner circle. None of the new series ordered for 2012 are even motorsports-related.

Meanwhile, back in Charlotte, NMG has moved into college football documentaries and non-motorsports series to pay the bills. That's right, NASCAR's TV company has college football programs showing up on ESPN and other networks that were edited in the shadow of the NASCAR Hall of Fame in NASCAR's own TV facility.

SPEED was the only viable option for NASCAR to develop a national cable TV network years ago. It was the reason SPEED moved to Charlotte. Unfortunately, personalities and politics did not allow a merger to happen. Too many agendas and too few people were involved who truly had the best interest of the sport in mind.

Now, there are several major media companies looking at NASCAR as a source of content that could easily support a national cable network. Ten months of racing, wonderful personalities and a fully-stocked TV production company just raring to go help that cause along quite nicely.

In the new world of HD cable networks, there are several corporations who operate multiple channels. Sometimes, these channels change themes and types of content just like a Country FM radio station suddenly changing to pop music overnight.

The NFL, MLB and NBA all cater to the fan with tons of news, stats and information as the foundation of their cable networks. The big games are still on the big networks and serve to bring in big money to help these themed cable networks to develop. Certainly, that would make sense for NASCAR in the beginning.

If NASCAR stepped away from SPEED and partnered with a different media company for a dedicated cable network what we would expect to follow would be the Camping World Trucks, the weekend programming from the tracks and the edited weekday shows like The Ten. All of that content is currently on SPEED.

The upside for NASCAR to pursue this concept is that the NMG folks could get to work maximizing the NASCAR brand in every way. Concepts long on the shelf could be brought out to actively involve the fan base through the growing social media technology. Any new TV network has to be totally interactive, available online and repeat primetime content for the West Coast every day.

The FOX Sports Media folks have their own agenda and are not owned by or partners with NASCAR. This is a relationship that may have run its course depending on who steps into the lead role at SPEED and what agenda he brings to the table driven by the LA-based management group.

With TV contract negotiations being conducted in 2012, we may see NASCAR strategically pursue a relationship with a major media partner other than FOX Sports to explore the possibility of launching a dedicated cable network under the NASCAR brand. This past week, SPEED may have made the first move in this direction a lot easier to take.

We welcome your comment on this topic. To add your opinion, just click on the comments button below. We ask that you refrain from hateful speech, derogatory comments or posting links to other websites. Comments may be moderated before posting. Thank you for taking the time to stop by The Daly Planet.