ESPN Gets An "A" For Effort 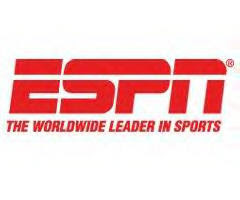 Friday night ESPN faced a big test of their "NASCAR readiness" as the network hosted a triple header of racing programming. Leading off was a one hour edition of NASCAR Now, followed by a thirty minute edition of NASCAR Countdown, and finally the Busch Series race from Daytona.

Host Ryan Burr welcomed viewers into an extended edition of NASCAR Now, with the big story of the night clearly centered around Boris Said. Sitting on the NEXTEL Cup provisional pole, Said was going to be out of the race and headed home if the remainder of qualifying was rained-out. This story was in-progress as the program aired. The fate of the Busch race was also undecided.

While everyone waited on Boris, ESPN General Assignment Reporter David Amber filed his best NASCAR feature to date on Denny Hamlin. Amber was struggling earlier in the season with racing, and might now be coming up to speed. As a reporter, Amber is floated around to different sports by ESPN. If he was permanently assigned to NASCAR Now, he could be a solid addition to the hard-working Shannon Spake.

Stacy Compton is just wonderful in his plain-spoken facts about NASCAR. Agree or disagree, Stacy tells it like it is. Alone on the set with Burr, he is at his best. Without the interference of Tim Cowlishaw, Stacy touched on many issues in a free-wheeling conversation with Burr about Daytona. Imagine that, unscripted conversation on NASCAR Now.

Tim Brewer has been having a tough time speaking clearly to issues that are not directly related to "crew chief" duties. On this day, he addressed the issue of suspended crew chiefs still in contact with the teams and actively participating in race strategy. Brewer has been gone from the sport for a while, and he basically re-enforced the company line about NASCAR and its penalties. This discussion needed another party involved, like a Rusty Wallace or Andy Petree.

Kudos to NASCAR Now for getting Boris Said live while he was still on the pole for the Pepsi 400. Said has been getting better both on the track and on TV this season. He is another example of a non-southern born driver who fans have embraced and really enjoy. Said gave a strong update of the situation at Daytona, and confirmed once again for fans that a small team with the right situation can compete in the Busch Series.

Burr introduced the Busch Series announcers, and Jerry Punch re-capped the field and let Rusty Wallace and Andy Petree talk about the race itself. Dave Burns chimed in with a solid report from pit road, and then Petree and Wallace made their race picks. Angelique Chengelis showed up to report on several news items, including the NEXTEL to Sprint Cup change in 2008. She has been a solid contributor to NASCAR Now from the beginning, and would be a a great on-set guest for a future NASCAR Countdown program.

Burr brought in Carl Edwards and Elliott Sadler for some rain-delay conversation about the Pepsi 400. Burr showed exactly why he should be the full time host of this program, as he talked freely and asked informed questions of both these drivers. The best part of Burr during interviews...is that he listens. The "fact or fiction" part of this interview was forced, and resulted in some awkward pauses.

NASCAR Now then announced that NEXTEL Cup qualifying was cancelled. Boris Said and a lot of the other "go or go home" cars would, in fact, be going home. In a bad moment, Tim Cowlishaw staggered in to add some obvious points about NASCAR's policy on rained-out qualifying. Burr talked with Compton about qualifying policy, and got the low-down on why things are handled this way. Kudos again to the show producer for following-up with a phone interview of Said after the announcement.

Once the familiar voice of Allen Bestwick hit the airwaves, fans understood they were leaving the ESPN studio, and going racing. It was time for NASCAR Countdown, the Busch Series pre-race show. Bestwick made a good decision to immediately tell viewers about the rain issue. Then, for some strange reason, ESPN's open to Countdown used footage of Kevin Harvick's NEXTEL Cup Daytona 500 win. Too bad we did not see the finish of last season's Daytona Busch race for the opening of the...Busch race.

Jimmie Johnson is not a natural as a TV commentator, and on the ESPN Infield Studio Set he was taken good care-of by Bestwick. Having Johnson on the set was smart, and he got more comfortable as the show went on. It was nice to see and hear from Johnson in a non-scripted environment. Brad Daugherty is kept on a very short leash by Bestwick, and has responded very well to this "tough love" be limiting his "answers" to a single topic...most of the time.

Nothing is harder for NASCAR TV types to do than keep the pit reporters up-and-running in the rain. Each reporter has a cameraman, two RF transmitter handlers, a spotter, TV utility workers, and security guards with them. Its a posse, and they are all connected with a lot of sensitive electronics. Any fan who has been at the track has seen the "pit posse" running all over the place. With only one minor glitch, ESPN kept these units going strong all night long in the rain, and it should not be overlooked. A very strong tech performance by the ESPN/NASCAR Images group.

With NASCAR Countdown done, the program slipped into the time that was originally going to be for racing. One thing that this rain delay showed to both viewers and executives at ESPN is just how important it is to have a veteran NASCAR announcer at the infield host position. Bestwick not only navigated safely though a rain-soaked Countdown show, he now was about to switch into his most important role of the night. It was time for Bestwick to direct some traffic.

Right away, during the rain delay, the pit reporters went out and grabbed driver after driver to chase down the stories of the week, and the season. This resulted in some fascinating conversations about a lot of issues. Then, the booth announcers chimed-in and one got the feeling that this ESPN NASCAR team was finally one cohesive unit. Anywhere viewers looked, ESPN has them covered.

Perhaps the most controversial feature of the evening was delivered by pit reporter Dave Burns. His interview with Jon Wood was well done, and got across all the information that Wood provided. Earlier this year, Jon appeared on NASCAR Now with his dad. There was little doubt that he was "altered" by something. It was unfortunate that Wood chose to appear Friday with uncombed hair and an unkempt look about himself. While we wish him luck in his recovery, there is little doubt there is more going-on than what Dave Burns was told.

Another smart move by ESPN was grabbing additional guests for the Infield Studio. Clint Bowyer and Ray Evernham stopped by, and provided just the type of content that this broadcast needed to fill some time, and yet keep the fans. It also highlighted the weakness of Brad Daugherty, who is unable to provide insight, and is forced into just commenting on the statements of others. "Voice of the fans" might be a good title for him, as he continues to try and define his role on this show.

When the news finally came, Bestwick frankly told viewers that the race was postponed until Saturday. After brief comments from the booth announcers, Bestwick closed out the ESPN coverage in diplomatic style. Finally, ESPN proved it could present a good quality night of NASCAR information. Bestwick gave credit to the ESPN technical crew, and explained exactly what the NASCAR schedule would be on Saturday.

Let's take a minute to recap. NASCAR Now was hosted by Ryan Burr and was a solid hour of breaking news, information and conversation. There was no hype, no phony stories, and no Erik Kuselias. NASCAR Countdown was a smooth-flowing show dealing with a rain delay, but providing Jimmie Johnson as a studio guest. It was clear that Johnson had a good time, and it was nice for fans to see him in candid conversation.

Finally, the race time was filled by ESPN pulling out all the stops and bringing in every announcer on their team. Added to the set were two guests, and added to the content of the rain delay was good humor and fun. The interviews were crisp, the cooperation of the drivers was great, and the fact that everyone on the team stayed focused on the task of providing a solid broadcast was outstanding.

It is tough to image anyone other than Allen Bestwick handling host duties from the ESPN Infield Studio. From thanking Ryan Burr to mocking Jerry Punch's golf swing, Bestwick kept things on track. He used his years of NASCAR TV and radio experience to provide the questions that kept the telecast going. Regardless of whether the issue was hilarious or deadly serious, Bestwick treated everyone with class and dignity, which is his hallmark.

So, ESPN gets an "A" for effort in the rain at Daytona. Having the right "team members" in place for these three shows made all the difference in the world. Its just too bad the network did not get an exciting Busch race to cap-off the evening. If they keep this energy level up, there is no doubt the Saturday race should be something to see.

The Daly Planet welcomes comments from readers. Simply click on the COMMENTS button below, or email editor@thedalyplanet.tv if you wish not to be published. All email is held in confidence. Thanks again for stopping by.
Posted by Daly Planet Editor at 9:33 PM 8 comments: