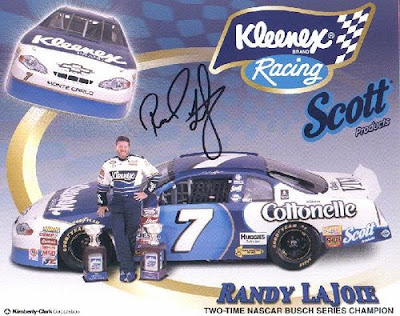 ESPN studio analyst Randy LaJoie was suspended on Tuesday by both NASCAR and ESPN.

Here is the NASCAR statement:

Randy LaJoie, a crew member for the No. 18 team in the NASCAR Nationwide Series, has been indefinitely suspended from NASCAR for violating the sanctioning body’s substance abuse policy.

On June 11, LaJoie was found to have violated Sections 12-1 (actions detrimental to stock car racing) and 19 (violation of the NASCAR substance abuse policy) of the 2010 NASCAR Rule Book.

ESPN did not issue a statement, but LaJoie was not present on the Monday NASCAR Now program on which he had been scheduled. The network confirmed on Tuesday that LaJoie had been suspended indefinitely.

LaJoie got out ahead of this issue in a series of media releases and interviews. He began by talking to Dave Moody on the Sirius Speedway radio program.

"I screwed up," LaJoie told Moody. "NASCAR tested me the day when I wanted to go spot for someone at Nashville. I already have two NASCAR licenses, but they said I needed a spotter's license, and that included taking a drug test. I took the test, and got a call a few days later, saying I had tested positive for marijuana."

LaJoie admitted to smoking marijuana in the infield campgrounds at the Charlotte Motor Speedway in the party atmosphere following the Coke 600 in May.

This was his statement on that topic:

“My use of marijuana was an isolated incident following the Coca-Cola 600,” he said. “I plan to follow the recommendations of the substance abuse counselor and suggestions of NASCAR and hope that someday I can prove to NASCAR and all the people with whom I associate that I have taken such steps to see that instances such as this do not reoccur.”

Finally, LaJoie said he would not challenge NASCAR on the issue:

"I take full responsibility for my actions and respect NASCAR's decision. I wish to apologize to my wife and family first, to NASCAR, to my fans and the various media companies for which I work."

While LaJoie was snared in a NASCAR trap meant for just this purpose, it is still not clear why a drug test done specifically for NASCAR has any bearing on his ESPN television presence.

ESPN is owned by ABC, which in turn is a Disney company. Needless to say, LaJoie failed a drug test for individuals who desire a NASCAR license in order to participate. LaJoie was working for Joe Gibbs Racing as a spotter on a one race contract. LaJoie did not fail any type of ESPN employee drug test.

LaJoie is an important connection to the Nationwide Series for ESPN. That family of TV networks carries all of the Nationwide Series race from start to finish in a TV package that still has years to go. LaJoie's personality, perspective and opinions have served the network well since he came on board.

Perhaps you could give us your opinion of this situation and whether you feel LaJoie should continue to be on ESPN as a NASCAR personality. To add your opinion on this topic, just click on the comments button below. This is a family-friendly website, please keep that in mind when posting. Thanks for stopping by.
Posted by Daly Planet Editor at 12:30 AM 58 comments: