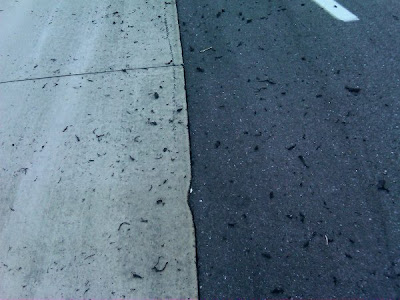 The topic today is supposed to be racing but instead it is tires. Goodyear and NASCAR made a change in the tire compound used at Martinsville and the results have been nothing short of a mess.

NASCAR told the drivers this morning in their meeting that they would be cleaning the track all day under the caution flags. This is a result of seeing what happened in the truck series race on Saturday. Any truck that got out of the single groove on the track got into the rubber "marbles" and was done.

This morning, NASCAR VP Robin Pemberton told ESPN's Marty Smith that this issue was going to result in "old school racing" where teams would simply have to conserve tires and decide on strategy based on wear. Pemberton said he hoped Goodyear might test over the summer at Martinsville before the next race.

Chris Myers will lead Darrell Waltrip and Jeff Hammond in the NASCAR on FOX pre-race show from the outdoor studio set-up on the Martinsville backstretch. It should be interesting to see how Waltrip handles the Goodyear topic.

Myers has been challenged to leave his tired act of being the confused clown and step-up to the plate as a sophisticated broadcaster. Now well into the season, Myers can make a big difference in the telecast if he allows the on-air presence he uses on other programs to emerge.

Mike Joy, Darrell Waltrip and Larry McReynolds are up next to call the race. McReynolds has been pushed into the background by FOX, starting with the network stopping his "Reach up and pull those belts tight" comment before the race. It's clearly all Waltrip all the time and that is what we should see again.

Waltrip has a long history at Martinsville and there should be plenty of personal references to his own success at this track. Now in his tenth season of NASCAR on FOX, Waltrip has started to put the spotlight on himself more than the drivers in the race. Perhaps this is a function of age, but it is clearly about him a lot more than it has been in the past.

Steve Byrnes, Matt Yocum, Krista Voda and Dick Berrgren are the pit reporters. Tires should be a primary issue, but pit strategy is going to be another race key. Martinsville is also famous for upset drivers, so keep an eye on which drivers that have fallen out of the race are interviewed.

Without using the high cameras on top of the tower, Martinsville makes little sense on TV. In-car cams and low angle shots under green do not show the positions on the track or what cars are racing for what positions. Aerial shots of this track also work very well showing positions, especially on restarts.

The finish line issue continues to be a hot one. Last week it was the winner only, although the second and third place cars just happened to sneak into that shot. At a short and flat track like Martinsville, accidents are known to happen long after the winner has crossed the line as the rest of the field battles to the finish.

FOX has been put in the position before or having to actually playback the lead lap cars finishing after putting the cameras only on the winner, his crew chief and his pit crew as the race finished. Keep an eye on this issue.

This post will serve to host your comments on the NASCAR on FOX coverage of the Sprint Cup Series race from Martinsville, VA. To add your TV-related comment, just click on the comments button below. This is a family-friendly website, please keep that in mind when posting. Thanks for taking the time to stop by The Daly Planet.