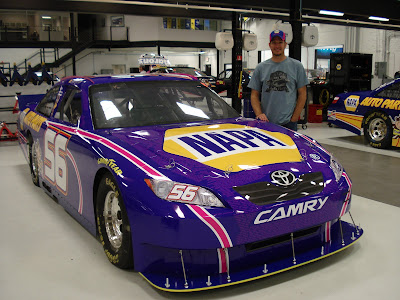 Last week the Sprint Cup Series put on the kind of show at Talladega that used to draw a full house. Instead, the stands were noticeably empty and the TV ratings fell almost 25%. This has been a very tough year for NASCAR, ESPN and the Chase.

Today, the later start time for the TMS race will allow both the pre-race and the race coverage to be on ESPN. There have been no changes in the network's on-air line-up despite the struggles with the ratings. That has been the style of ESPN for the last four seasons. Changes are made in the off-season.

In the NASCAR Countdown pre-race show, Allen Bestwick and his endless enthusiasm for the sport are mixed with the offbeat comments of Rusty Wallace and the politically correct words of Brad Daugherty. This trio has accomplished little in the past four seasons.

Wallace arrived in the infield after a fractured stay in the broadcast booth. His role as the lead analyst was quickly changed after his comments proved to be driven by his personal relationships with the drivers, teams and owners involved. In the end, ESPN removed him for the fresh presence of Dale Jarrett.

Daugherty came along in the new TV contract and was quickly dubbed "The voice of the fans" by Bestwick. Daugherty may be politically connected and a current Sprint Cup Series team owner, but on TV he is a dud. His enthusiastic back-slapping for the sport adds nothing in terms of information and he has worn out his welcome.

Bestwick ends his segments by passing the telecast to Marty Reid, the new play-by-play announcer for NASCAR on ESPN. Taking over from Dr. Jerry Punch, Reid came in with support from fans and the media, including this blog. After a relatively harmless Nationwide Series stint, the wheels came off for Reid once the Sprint Cup Series coverage began.

Now openly taunted by fans online, Reid's issues with the longer races and his lack of NASCAR knowledge surfaced quickly. When Jarrett and Andy Petree are not providing him information, Reid struggles to provide the kind of exciting commentary for which he made his name. Whether driven by orders from the management of lack of chemistry in the TV booth, Reid has simply been watching the TV monitors and talking about what he sees.

Jarrett and Petree continue to provide solid information and analysis, but have not meshed with Reid in terms of creating dynamic live sports television. It should be interesting to see what ESPN shakes-up during the winter.

As most readers of this blog know, the veteran NASCAR on ESPN producer was terminated after being arrested in Connecticut several weeks ago. ESPN's other line producer had already left the series for personal reasons. Now, the producing of the races is up to a young lady who was serving in a management role.

Last week at Talladega it became very clear from communications overheard from the TV truck that things were a mess. The producer was unclear several times on who was leading the race. The situation on the last lap left her in a lurch. Her lack of leadership and problem solving ability was the buzz all week long.

Dr. Jerry Punch, Jamie Little, Dave Burns and Vince Welch are the pit reporters. For all the drama in the booth and the TV truck, the pit reporting team has flown under the radar. No incidents with drivers this season, no big errors and no hype-driven agendas. It seems that the presence of Punch has brought this group together.

While SPEED is making all kinds of changes in on-air personalities to set-up next season, ESPN is going to finish the season with this team intact. It should be very interesting to watch the chemistry and hear the conversations between all the participants in this ongoing soap opera.

Thanks to Martin Truex Jr. and his team for the picture of the special car that he will run today in support of a $250 thousand dollar donation to the Susan G. Komen For The Cure Foundation from NAPA. The car has the names of over 2400 survivors and victims of breast cancer written in pink on it.

This post will serve to host your comments on the ESPN coverage of the Sprint Cup Series race from the Texas Motor Speedway. To add your TV-related comment, just click on the comments button below. This is a family-friendly website, please keep that in mind when posting. Thanks for stopping by.