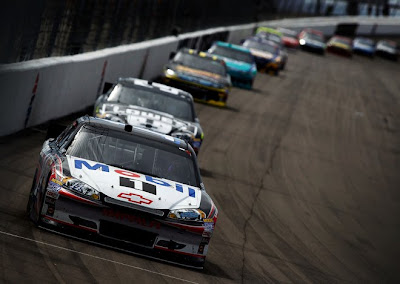 The stage was set once the cars began to string-out on the Las Vegas Motor Speedway track. This race has been all about clear air, gas mileage and pit strategy for years.

The NASCAR on FOX pre-race team continued indoors this season. Chris Myers and the Waltrip brothers now have a format set that is very different from the Jeff Hammond days.

Mike Joy, Darrell Waltrip and Larry McReynolds discussed a lot of topics during the race. Two of them not discussed were passing under green and incidents due to racing on the track. This race looked a lot like practice on TV and there were certainly reasons why.

FOX has a philosophy of showing one or two cars at a time on the screen. They have done this for years. Only the big pack at Daytona pushed the cameras wider. At Las Vegas, the in-car cameras were frequently used on restarts which were the only laps that could have provided actual side-by-side racing on-screen.

Hammond was out and about, but his reports were inserted under green and often distracted from the racing. He was used frequently and sometimes seemed to be working to get into the coverage rather than offering some information that was on target for the situation in the race itself. This roving reporter is a new concept for the FOX coverage.

The network has the best corps of pit reporters on TV. After early use, these four professionals faded away as the voices in the booth dominated the telecast. FOX put the emphasis on Darrell Waltrip several years ago. Joy's role is to facilitate, not excite and that continued.

FOX inserted side-by-side commercials well after 5PM, which marked the final hour of scheduled coverage. This concept has been embraced and promoted by ESPN, but seems to be hit or miss with FOX.

There was a flurry of excitement in the closing laps, but it did not feature the kind of racing fans enjoy. The wideshot at the finish allowed the top ten cars to be seen crossing the line. FOX stayed past the scheduled off-time to conduct post-race interviews.

Every NASCAR TV network has the perfect right to present the sport as they choose. The FOX presentation is similar to last season. Tight shots mixed with extensive Waltrip commentary from the booth and a heavy commercial load.

This post is your opportunity to offer your opinion on the TV coverage. To add your comment, just click on the comments button below. Thank you once again for stopping by The Daly Planet.