The TV Curse Of The Final Mile 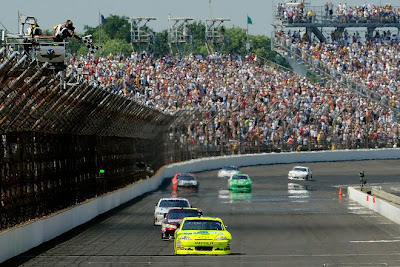 The "final mile" in sports television is special. The race down the stretch of the Kentucky Derby. The last batter in the 9th inning of a one-run baseball game. That crucial putt on the 18th hole to win the golf tournament. Sports TV loves the game, but lives for fantastic endings.

Sunday at the Brickyard 400 folks were asked to tune-in to ESPN for a one hour pre-race show. The race then started and ran for about three hours. It was a typical Indy race with little passing, critical pit stops and lots of jostling on restarts.

Ultimately, the drama of the race came down to the final mile. Jeff Gordon had blazed by a group of slowing cars creeping toward the finish line at reduced speed while saving fuel. What was unfolding on the track were two dynamic stories. One about who would win and another about who would finish.

In the end, ESPN chose to show only who would win. The cameras followed Menard down the frontstretch, zoomed into the flagstand and then the director kept the focus on Menard's crew, relatives and in-car cameras.

ESPN's opinion of the Brickyard 400 is that it is the Indy 500 for NASCAR. Nothing could be further from the truth. It's just race 20 of 36 in a season that began in February.

The real stories of the race were unfolding throughout the lead lap cars. Top drivers and teams were locked in a pitched battle for Chase contention that was now down to the last lap. With many teams running on fumes, it was going to be a battle for survival and a scramble to the end. NASCAR's precious points were on the line.

After asking fans of all the drivers to watch for hours, ESPN failed to serve any of them except the Menard followers. The network actually made the decision not to pay-off the stories the ESPN telecast team had been excitedly describing during the final laps.

With few caution periods in the event, ESPN then spent plenty of time interviewing drivers that TV viewers had never seen finish the race. Many of those interviews were actually the first time fans learned where their driver had finished and how he got there.

Perhaps the most ironic part of this issue is that the ESPN producer made the decision not to replay the finish of the lead lap cars at any time in the extensive post-race show. Even as drivers spoke about the final lap drama, ESPN would not acknowledge it's shortcoming by letting viewers see the footage.

As we have said several times in the past five seasons when this issue has arisen, NASCAR fans do not change their driver allegiance during the race. Fans wearing Stewart, Edwards or Earnhardt t-shirts and hats want to know what happened to their driver in the last mile after watching for hours.

The second and final point on this topic is fundamental. The race is not over when the winner takes the checkered flag. On a large track like Indy or a short track like Bristol, there are stories continuing to take place as the lead lap cars race to the line.

No driver stopped racing on the final lap simply because Menard had won. That statement even sounds absurd. Yet, that is exactly what ESPN chose to relay to fans at the finish. Here is your winner, there is nothing else to cover.

Sure, ESPN paid the money and they can do what they like with the telecasts. Sure, ESPN only echoed the "classic" finish line camera move of the Indy 500. Sure, Menard winning was a good story. Sure, ESPN loves sports drama and fans just have to deal with it.

But across the country, fans of the drivers not shown finishing are about to make that big decision. Now with a bad NASCAR taste in their mouth, the NFL football jersey hanging in the closet starts calling. It's a familiar refrain.

We are your hometown team. We stop play for commercials. We always show replays. We never leave you lacking information. ESPN never even showed your driver finish. If he doesn't make the Chase, you'll never see him anyway. Come on over.

Last year ESPN got walloped as the Chase began. Viewers left in record numbers and did not return. This year was supposed to be different. Bestwick in the booth, change in the air.

My favorite driver was also not shown finishing the race. I had no idea what happened on the last lap. Today, I looked at the price of The NFL Red Zone on my cable TV system. Every game, every crucial play, all the information.

I just wonder how many other NASCAR fans are trying to make the same decision.

We welcome your comments on this topic. To add your opinion, just click on the comments button below. Thanks for stopping by.