And On The Fourth Day He Tweeted 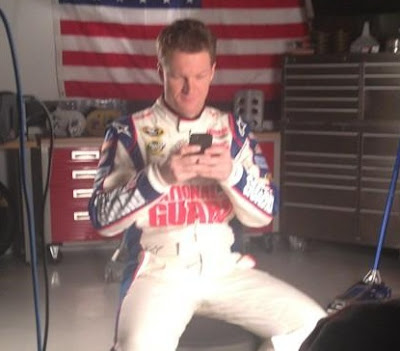 There he was, assuming the position that many of us know so well. That is Dale Earnhardt Jr. and he is on Twitter using his sponsor's account to interact with fans. Earnhardt used the National Guard account and the #DaleTakeOver hashtag to spend an hour Wednesday spontaneously answering questions from all kinds of fans.

This is how reporter Aaron Burns described the experience in the Mooresville, NC News:

Earnhardt has a Twitter account but he’s never used it, preferring to stick to Facebook despite fans’ repeated requests for him to join the Twitterverse. He’s one of only two Sprint Cup Series drivers – Carl Edwards is the other – to not tweet regularly.

Among other items, Earnhardt suggested his fans listen to “I’m on Fire” by Town Mountain. He also said his favorite television mini-series is Lonesome Dove and his favorite sandwich is a turkey burger. He didn’t commit to trying Twitter on a full-time basis, but said he enjoyed the experience.

“This is an awesome way to connect with my fans,” Earnhardt said. “(I) appreciate the involvement.”

Once again, it seems that Earnhardt and the entire PR and Marketing arms of both Hendrick Motorsports and JR Motorsports missed the point. It's not about Junior.

It took a little encouragement for some personalities to join Twitter. Perhaps, this might be the encouragement for Earnhardt. Simply by asking folks like Mark Martin, Darrell Waltrip or Kevin Harvick about their experiences Earnhardt would find out just how much a simple app on a cell phone can accomplish.

It seems ironic that with only days left in the season fans get to interact with Earnhardt on Twitter at 3PM Eastern Time on a Wednesday. As a Twitter search of the @NationalGuard account will prove, even in this limited amount of time conversations were had and questions answered that generated interest and helped to open the door to this elusive personality.

Twitter has proven to be an effective tool for high-profile personalities from NBA star LeBron James to tennis star Rafael Nadal. Earnhardt actively using Twitter would enable that content to be posted on websites that integrate NASCAR tweets through software called widgets.

In other words, websites around the world would be adding Earnhardt's Twitter content to the existing list of drivers from the sport who are already featured. In much the same way that Twitter allows hundred of NASCAR personalities, facilities and media organizations to interact with NASCAR fans the sport would now be able to feature its most popular personality.

James reaches 6.49 million users each time he tweets. Nadal sends each message to 3.35 million fans around the world. It certainly would be interesting to see if an active Earnhardt Twitter account would wind-up having more users than the upcoming Homestead Sprint Cup Series finale has TV viewers.

Anyway you slice it, 2013 is the year of NASCAR taking control of its own digital efforts. It certainly would be nice if the most popular driver played a key role.

We welcome your opinion on this topic. Comments may be moderated prior to posting.
Posted by Daly Planet Editor at 9:15 PM 32 comments: