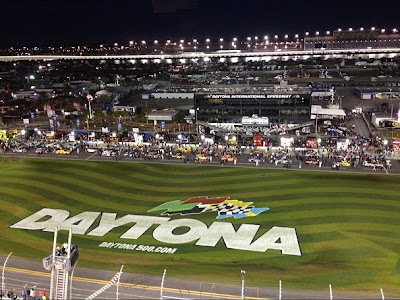 TNT chose to hold the breaking news of AJ Allmendinger's suspension until ten minutes into the one-hour pre-race show. The arrival of substitute driver Sam Hornish was documented, but no NASCAR or Team Penske spokesperson was interviewed. Instead, a statement was read on-air by the TNT announcers.

The racing involved the typical superspeedway struggle of an outside line of cars trying to get up and pass the lower lane on a track with fresh pavement. Most incidents happened not from real racing, but from blown tires, a pack of cars trying to pit and even on pit road. The big mess happened very late.

Racing aside, TNT's "Wide Open" coverage was perfectly timed. Fans had been screaming about full-screen commercials and the loss of racing action all season long. The final hour of side by side commercials on FOX had turned into a disaster when the director framed the cars being featured in the TV ads. TNT had no side by side commercials in the first four races, but offered the online RaceBuddy as an alternative.

Saturday night's coverage featured commercial messages, many of them custom-made, played in a video box on the screen that let fans continue to see the racing. Only the local commercial breaks from the cable TV companies were still full-screen. It was the type of video presentation that NASCAR needs to adopt quickly.

Adam Alexander's style is not to call the traditional play by play, but to lead Wally Dallenbach Jr. and Kyle Petty in a casual discussion. Perhaps, the call of an experienced lead announcer would have served to establish a level of excitement during the race that Alexander simply cannot build. Petty and Dallenbach are both former drivers, so the vast majority of the race is spent agreeing with each other on opinions.

TNT had a rough night with the graphics and the sync of the show. There were a ton of graphics in the show and the overload probably contributed to the situation. The sync of the pit reporters and commercial elements was not quite right. This is sometimes called "lip flap" in the business because the sound being heard does not match the lips of the person saying it. Tough technical night.

Update #1: Being told the HD feed on TNT was in sync. Seems the SD feed was experiencing the problems. Hope to get this updated shortly.

The sprint to the finish started with 13 laps to go. The pit reporters tried to contribute excitement, but going back to the TV booth was like throwing a wet blanket over the coverage. Alexander never raised his voice as the snarling pack came around with 10 laps to go at Daytona in the July night race. 8 laps remained when the first of two big accidents happened in the race.

The final restart resulted in a typical restrictor plate finish of pushing and shoving until a crash happened. Coverage at the line was the standard wideshot while the accident unfolded. The post-race was subdued and moved to the NASCAR website as it normally does with the TNT races.

The positive thing to take away from this telecast is that commercials can be inserted into a live race with only minimum interruption of the racing action. The TNT design of graphics and the commercial video box works well on TV and the screen remaining for the live race keeps viewers watching. It makes sense for NASCAR and the advertisers.

This post serves to host your opinion on the TNT coverage of the Sprint Cup Series race from Daytona. Comments may be moderated prior to posting. Thank you for stopping by The Daly Planet.
Posted by Daly Planet Editor at 1:00 AM 71 comments: