Your Turn: Sprint Cup Series From Pocono On ESPN 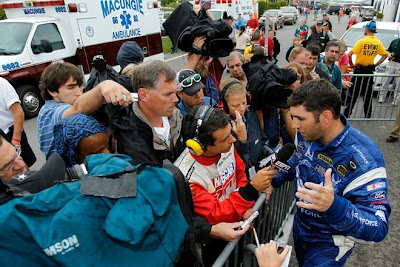 Update: We are leaving this post up for one extra day. Getting great comments from fans on the Pocono coverage. Thanks.

It was a long day in Pocono for the ESPN team. After a thirty minute delay for rain, the race coverage began with long green flag runs and little racing.

Allen Bestwick started the pre-race show over on ESPN2 as women's golf was live on ESPN. Bestwick was with Rusty Wallace and Brad Daugherty. The pre-race show featured highlights, several edited features and some interviews.

Pocono is either feast or famine. Race coverage was straightforward and featured recaps, pit road updates and good information. The original problem was there was not much to cover.

Several caution periods closed the field and resulted in periods of hard racing. The TV coverage struggled to cover the many races for position on the big track. ESPN used a split screen effect and also just jumped from one camera to the next.

A big wreck late in the race caused a mess. Kurt Busch and Elliott Sadler had hard hits with Sadler's wreck remaining a mystery on TV. ESPN had no replay of the Sadler portion of the accident on the backstretch. That was rough for viewers.

ESPN interviewed both Busch and Sadler when they were released from the Infield Medical Center. A red flag allowed for more interviews before the final restart.

Rain came with 28 laps and the field under caution. The race ended with a short sprint to the finish without incident.

I will have plenty to say about the coverage of this race once the Your Turn comments are completed. To add your race recap of the TV coverage, just click on the comments button below. This is a family-friendly website, please keep that in mind when posting.
Posted by Daly Planet Editor at 10:00 PM 82 comments: