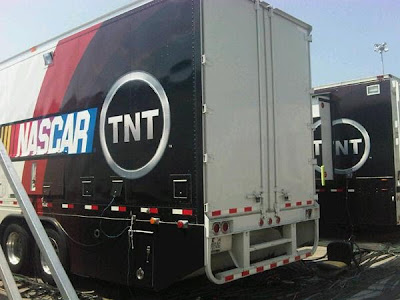 Since the "Wide Open" coverage from Daytona was done, TNT came back with another special feature for Saturday night's first Sprint Cup Series race from Kentucky Speedway. It was called "enhanced audio."

Here are some quotes about this special feature:

TNT Countdown to Green host Lindsay Czarniak explained the audio-enhanced coverage: "We are using special affect sound by bringing you something we call 'Inside Trax Enhanced Audio.' We’ve added 40 microphones all along the track walls, through the turns and down in pit road to get you closer to the action on the race track.”

This from a TNT news release:

The network’s exclusive prime time coverage of the race will be a special audio-enhanced telecast with 40 additional special effects microphones placed in multiple positions around the track, including pit road, the front and backstretches and the turns, to boost the listening experience for NASCAR viewers.

On average, TNT uses approximately 50 microphones for their race coverage on a track this size. The network also will utilize increased audio from in-car communication between the drivers and race crews and will continue to mic-up select crew chiefs and their teams through Inside Trax which will provide fans with inside access to the sounds and strategy of racing.

Once the race got underway, another element of the "enhanced audio" not mentioned by TNT was made apparent very quickly. That element was silence.

During restarts, pit stops and other select times that the special effect was used, the announcers stopped talking. This is nothing new, as other Sprint Cup Series TV networks have segments called things like "Crank It Up" to feature the sounds of the track.

What was different with TNT was that these segments were frequent and often seemed to cost viewers valuable information. Pit stops seemed to be especially tough for some fans to digest when all that was heard was the sound of air guns, engines and tires.

The pit reporters were given an opportunity to update the field once the stops were done or just after the race returned to green, but it certainly was a very different viewing experience. It quickly showed the importance of getting information in a timely fashion.

The pauses from the announcers led to an awkward feel from the trio in the booth. It certainly wasn't the type of flowing conversation-style commentary we have come to expect from Adam Alexander, Kyle Petty and Wally Dallenbach Jr.

NASCAR fans also had NASCAR.com's RaceBuddy available to them during the race. This online video and audio component features 4 in-car cameras, 2 battle-cams and views of the backstretch, pit road and corners. Several of the cameras have only the sound of the cars as the audio provided to users.

In TV, the actual sound of the sports event is called "natural sound." Nat sound is the short version used by folks in the business. The process of mixing the nat sound with the announcer audio and other playback sources is the job skill that keeps good remote audio mixers working nationwide.

Whether it is the sound of sneakers under the backboard in college basketball, the pop of a fastball into the catcher's mitt in baseball or the grunts and hits in an NFL game, today's sports TV fan has come to expect the entire audio experience.

TV viewers in our live race chat asked if this was just a gimmick for the last two TNT races. Others were upset that the "enhanced audio" portions seemed to be tied to the director showing in-car cameras almost exclusively. One late arriving fan wondered if he had stumbled into an IMAX movie.

As the race went on, the trill of "enhanced audio" seemed to be gone for many. There was a rush to find the local PRN station for a full audio feed from the track's radio partner. Folks on Twitter started trading online apps to get PRN stations.

All of it seemed to come down to one simple thing. NASCAR fans like to be informed. Not informed only about the race leaders, but about their favorite driver regardless of position. The search for information other than the ticker at the top of the screen was perhaps made a bit more difficult by the announcers and their periods of silence.

There is no information yet as to whether the "enhanced audio" feature will return for New Hampshire. That is the final race in this season's TNT package. ESPN then takes over starting in Indy at the Brickyard and handles the final seventeen races.

We welcome your comments on TNT and the "enhanced audio" experiment at Kentucky Speedway. To add your opinion on this topic, just click on the comments button below.