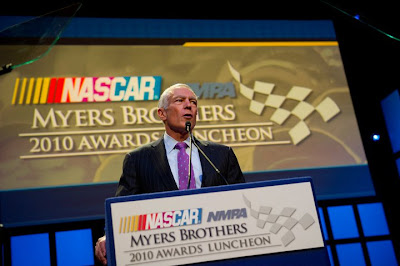 Fans watching the NASCAR.com live stream of the Myers Brothers luncheon last Thursday from Las Vegas saw something very interesting. Amid the checks and awards being handed out to drivers and crew chiefs, NASCAR Chairman Brian France took the podium.

His professionally-crafted message included a video presentation, a patriotic theme and several guests. France offered a hard sell of what has become a personal mission for the chairman. It was all about American ethanol. Click here to see the presentation.

It was 2007 when IndyCar promoted that its top series would run totally on US ethanol in a major political move fronted by the Ethanol Promotion and Information Council (EPIC). Today, the IndyCar Series gets 100% of its ethanol from Brazil and the abandoned EpicInfo.com website can be yours for $2,495 from HugeDomains.com.

The new group fronting US ethanol and partnering with NASCAR in a six year high-dollar promotion is called Growth Energy. Click here for the organization's website. A big part of the new venture and pictured above is retired four-star US Army General Wesley Clark. His message last Thursday about increasing US ethanol consumption included the fact it would help "national security."

All types of media organizations covering NASCAR, energy issues and the ethanol industry passed along the message delivered at the luncheon. Click here for the Growth Energy Facebook page and that carries the same message.

Click here for a rather different take on the proceedings. Michael Knight is a veteran PR and media type with a long history in IndyCar and motorsports.

Here is an excerpt from Knight's blog:

Color NASCAR’s second Sprint Cup awards activities in Las Vegas green. But, for a few moments last Thursday, I was trying so hard to keep from laughing that I was close to blue.

What had me amused, other legitimate considerations aside, this clearly was at least an indirect shot at the IndyCar Series. NASCAR has many ways to play the racing political game and in the aftermath of the unhappy IndyCar-International Speedway Corp. split, this was an example of who still has the muscle in the U.S. motorsports industry.

Remember, when IndyCar went to ethanol a few years ago it was using corn ethanol in association with a U.S. trade group (EPIC). When said trade organization went belly-up, IndyCar had to go to Brazil for its ethanol.

Now NASCAR has staked its claim to the red, white and blue benefits of green and that’s no coincidence. It’s a political shot across the bow of the IndyCar series. NASCAR is even copying IndyCar’s E-logo on the green flag.

Knight seems skeptical of France's claim that the environment is actually driving the Growth Energy deal. So, let's take a look at two ethanol stories. Dr. Diandra Leslie-Pelecky is the author of The Physics of NASCAR: The Science behind the Speed.

Click here to read her take on the ethanol issue. Here is an excerpt:

It is very difficult to find anyone in the energy field who will argue that corn ethanol is a sustainable fuel or a wise choice for the future. Corn is a high-maintenance energy source and virtually no one not associated with the corn lobby is arguing that making corn production more efficient will make enough of a dent in the problem to be worthwhile.

Three days after posting the article and then appearing on NASCAR Sirius channel 128 to discuss the ethanol issue, Dr. Diandra posted this on her Twitter account:

If you are following me for NASCAR, please unfollow, as I won't be tweeting about NASCAR any more in the future. Thanks.

For many years, Dr. Diandra was a fan and media favorite for NASCAR topics explained from a scientific perspective. She has not posted on the Building Speed blog or returned to address any NASCAR topics since that day.

Many consider the 2008 Time Magazine story titled The Clean Energy Scam by Michael Grunwald a definitive piece on the reality of ethanol. Click here to read the article.

Here are some sentences from the Grunwald piece that leap off the page:

The grain it takes to fill an SUV tank with ethanol could feed a person for a year.

Update 1PM ET 12/6/10: Here are two more links passed along by readers that address this topic:

This is stunning: "Producers of ethanol made from corn receive 73 cents to provide an amount of biofuel with the energy equivalent to that in one gallon of gasoline."

That's 73 cents in federal tax subsidies, says the Congressional Budget Office — or 45 cents for every gallon of ethanol blended into gasoline.

“First-generation ethanol, I think, was a mistake. The energy conversion ratios are at best very small,” Al Gore said. “It’s hard once such a program is put in place to deal with the lobbies that keep it going.”

Right now, the NASCAR partnership with Growth Energy is just a series of announcements and media releases. Most of us only know that E:85 from Sunoco works fine in the gas tanks of our cars but not too well in everything from string trimmers to boat engines.

The upcoming rule changes in the Sprint Cup and Nationwide Series were set to be the key media stories of 2011. Instead, when France reappears on January 21 at Daytona to preview the season, it may well be questions about what goes in the fuel tanks of NASCAR's top three series that generate the headlines.