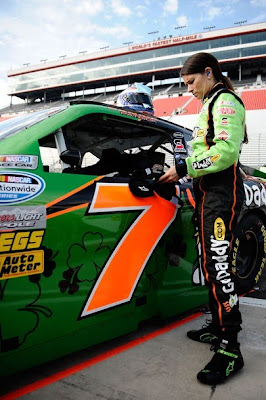 Update: The race is over, Elliott Sadler is the winner and Danica was lapped before halfway. Typical ESPN race with tight camera shots, in-car cameras live and full-screen replays under green. Most of the actual racing was missed on TV. Marty Smith appeared pre-race in the Infield Pit Studio and shook up both Rusty Wallace and Brad Daugherty by disagreeing with them on almost everything. That was priceless. Happy to have your post-race comments on this post.

She was 26th on the SPEED chart, no one picks her to win the race and the 19 year-old girl in the field has more than twice her short-track experience, but Danica Patrick is once again going to be the TV focus on Saturday.

SPEED has Patrick in the Nationwide Series qualifying show at 10:30AM. Rick Allen, Phil Parsons and Jeff Hammond will have plenty of time to talk about Patrick's well-funded team challenging the Bristol high banks with lots of crew but very little driver experience. Qualifying at this track is a moment that can humble any driver at any time. It should be interesting as it is only hours before the race.

ESPN then has an entire hour of NASCAR Countdown at 1PM to explore Patrick's attempt to last in a field of hungry Nationwide Series regulars and five Sprint Cup Series cross-over drivers. After her recent run of avoiding the media, it should be fun to hear Patrick's pre-race comments.

Analysts Rusty Wallace and Brad Daugherty have been a little testy with each other this year down in the Infield Pit Studio. It may well be that the producers have asked them to spice things up a little bit. Having Patrick racing at a track like Bristol may give these two ESPN personalities a little more fuel for their personal fire.

The Go Daddy media hype machine has also been in high gear this week announcing that Patrick will head to Tony Stewart's Eldora Speedway for his Prelude to the Dream charity race. The media release explains that Patrick's previous experience racing on dirt was in a go-kart at the age of 14. Keep an eye on whether this topic makes it into the pre-race show.

Allen Bestwick has kept a level head, but Dale Jarrett has been squarely on the Danica bandwagon for some time now. Andy Petree joins those two as the live race coverage starts on ESPN at 2PM. While the pit reporters are limited in their contributions at a noisy track like BMS, ESPN will have all four of the regulars on hand and ready to cover the action. It could make for some interesting post-accident interviews.

As usual, we will be hosting a live stream of conversation on Twitter starting with the pre-race show. To locate our stream, just type #TDP1 into the search box on the Twitter page and it will appear. To have your comments in the stream, just add #TDP1 to the end of your tweets.

If you have not already come over, stop talking yourself out of it. We now have almost every driver, TV personality, team, track and NASCAR reporter actively involved in social media. The live stream is easy, free and if I can figure it out you can too.

Thanks again for helping the NASCAR community grow the social media presence on Twitter. Fans are a huge force in change and your voice and comments are heard loud and clear.

If you have any Danica Patrick comments on the TV coverage, please feel free to leave them below. Thank you for taking the time to stop by The Daly Planet.