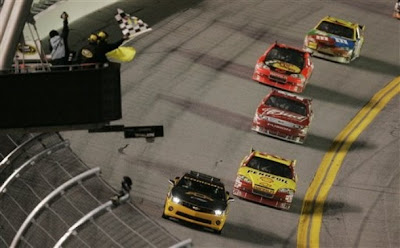 This is the tenth season for the NASCAR on Fox gang. They are well known to fans. Many on the TV team have extended their careers to other programs and networks using NASCAR as a launching pad. From the colorful network president David Hill to the good ole boy personality of Darrell Waltrip, Fox is NASCAR's "TV franchise."

When things go bad, it's Darrell Waltrip who shows up to discuss the situation on other TV programs. Mike Joy is widely regarded as the best motorsports TV play-by-play announcer currently on the air. No one works harder on the NASCAR TV trail than Larry McReynolds.

Last season, the Chase ended with a thud. The ESPN production team had decided that Jimmie Johnson was going to get the kind of hyper-coverage the network has provided for Brett Favre and others. It was overboard, misguided and backfired with the fan base.

NASCAR has its own personality. It simply cannot be compared to stick-and-ball sports where TV production is concerned. For a network that has developed an entire culture wrapped around exactly that, NASCAR has proven to be a challenge. ESPN limped away from 2009, but the damage had been done.

While some support programming has originated this week on SPEED, it was the Saturday coverage on Fox that was going to be the focus of the new season. In the past, Fox has struggled with hype and over-promotion of topics from Kyle Busch to Digger. Fortunately, Fox saw the ESPN chaos and made the right decision.

NASCAR on Fox debuted with Daytona 500 qualifying and used the opportunity to draw fans back into the sport. They simply served up an entire day of comfort food. Nothing fancy was unveiled. The formula was made simple from the start. Let the fans reconnect with the drivers and get out of the way.

The familiar interview, qualify and then interview again cycle played out as usual. Chris Myers hosted Robin Pemberton in the Hollywood Hotel to explain changes to the COT for 2010. The segment covered the live qualifying of two cars and reinforced that there was still a star system in place for who gets time on live TV.

Fortunately, the three men in the announce booth told the story of the changes in drivers, teams and owners throughout the session. The veteran pit reporters never missed a beat and let the drivers relay their thoughts to the fans. From the enthusiasm of eventual pole winner Mark Martin to the deliberate focus of Dale Earnhardt Jr., the personalities came through clearly.

After a break for the chaos of the ARCA race on SPEED, the NASCAR on Fox team returned for the Bud Shootout. All it took was cars at speed in Daytona to begin erasing the memories of 2009. Jimmie Johnson was rarely mentioned. Hendrick Motorsports was not hyped as the second coming.

Fox walked exactly the right path in pointing the cameras at the cars and just calling the action. Digger maintained a much lower profile and was not the object of forced announcer voice-overs and bad jokes. The gopher graphic never interfered with the telecast. What a nice change of pace.

Every network has issues and Fox continues to insert the in-car camera shots at strange times. Location of the cars on the track and which cars are being shown is always interesting. Nothing breaks up the momentum of a great lap like a random in-car shot that takes time to identify. Who is that and where is he on the track?

Luckily, the racing cooperated with no big wrecks mixed in with the normal pushing and shoving. Cameras captured the incidents and replays worked well to explain what happened. The cars provided enough excitement as everyone just seemed happy to get back on the track and racing.

While there are various opinions on the finish, one thing was clear. After the final accident, Mike Joy quickly said the race was over and the flagman displayed the caution and then the checkers. Earlier in the day, SPEED had mentioned that the Shoot Out could not end under caution. Race winner Kevin Harvick backed up that point in his post-race appearance on TV.

Even with that final glitch, NASCAR and Fox both breathed a big sigh of relief once the day was over. Saturday was meant simply to set the table for the Daytona 500 and that was done. Cars were back on track, personalities were on display and NASCAR was back on national TV.

If you watched these programs, how about sharing with us your impressions of the return of the NASCAR on Fox team. To add your opinion on this topic, just click on the comments button below. This is a family-friendly website, please keep that in mind when posting your comments. Thanks for dropping by The Daly Planet.
Posted by Daly Planet Editor at 1:00 AM 47 comments: