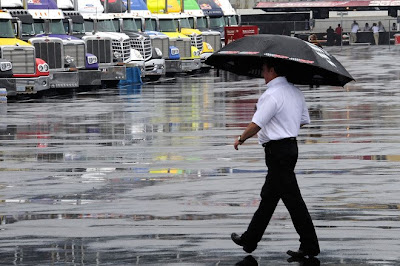 It's been a rainy day in Kentucky, with activities at the track interrupted several times. Luckily, ESPN has all eleven NASCAR announcers in place to fill any time needed.

Allen Bestwick is on ESPN at 7PM with NASCAR Countdown. He has Rusty Wallace and Brad Daugherty alongside for a scheduled thirty minute pre-race show. Upstairs in the TV booth is Marty Reid, Dale Jarrett and Andy Petree.

Over in the Tech Garage is Tim Brewer. On pit road are Dr, Jerry Punch, Jamie Little, Dave Burns and Vince Welch.

The good news is that the weather is clearing, but showers are still possible and this track has been plagued by "weepers" in the past. Those are the pesky spots in the seams of paving on the track that let water "weep" through even after the track itself is dry.

The pressure of this race telecast is clearly on Marty Reid. Allen Bestwick has been filling-in for Reid as he worked the IndyCar races and has done an outstanding job. Some poor choices in what Reid has said on the air this season and some bad decision-making in what he has not is resulting in a pretty vocal fan backlash.

Our feedback in comments on this blog, Facebook and Twitter has not been positive. With the Chase coverage looming, this is a good opportunity for Reid to step-up and get back in the groove of providing quality play-by-play for a primetime Nationwide Series race.

ESPN has been having a solid season in terms of beginning to understand the concept of showing the best racing on the track and the developing stories. This is a long way from following the leader and only focusing on the stories discussed in the pre-race show. We call that following the script.

The challenge tonight is to essentially preview for TV viewers what they will be seeing when the coverage of the Sprint Cup Series switches to ESPN in July. The last four seasons have been rough. It should be interesting to see what changes between now and then in terms of on-air personalities or coverage.

We invite your comments on the ESPN coverage. To add your TV-related opinion, just click on the comments button below. Thank you for stopping by The Daly Planet, some comments may be moderated before posting.