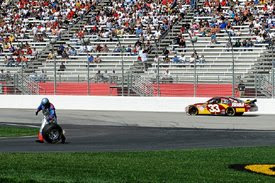 Well, The SPEED Report jumped right into the deep end of the pool on what is left of the rapidly fading Tiregate issue from Atlanta. Co-hosts Ralph Sheheen and Leigh Diffey had a very clear reason as to why there was no conclusive video footage available of the incident. It's all an Internet conspiracy theory.

NASCAR fans are used to the TV networks and the NASCAR Media Group surrounding the Sprint Cup Series races with enough cameras to film almost everything. Last week Yahoo! Sports even featured video of Carl Edwards running to the restroom before a race.

Diffey and Sheheen explained that this conspiracy theory states that SPEED, Fox and ESPN are withholding footage that can answer the one remaining question. What is still to be determined is whether Paul Menard's pit crew deliberately rolled that loose tire directly onto pit road and into the frontstretch grass under green flag pit stop conditions.

This issue only arose because ESPN pit road analyst DJ Copp suggested that was the case on a NASCAR Now appearance earlier in the week. Copp offered this information to Allen Bestwick, who then followed-up with panelists Ray Evernham, Ricky Craven and Mike Wallace.

In a very strange TV moment, SPEED played what it claimed was the only footage the network has of the incident. That was a bit ridiculous. The SPEED Report is produced by the network, but all the other NASCAR shows including the Monday night program are completely produced by The NASCAR Media Group with SPEED as the client who pays the bills.

What Sheheen and Diffey never addressed were the camera angles that could easily have solved this incident and put it to rest once and for all. Both the Marcos Ambrose team with DJ Copp as a tire changer and the Menard team have cameras hanging over pit road that record the pit stops. Where did that footage go?

Simply taking a moment to replay both these angles could have solved this problem and either verified Copp's comments or ended the discussion entirely. Unfortunately, Sheheen and Diffey ducked this issue faster than Digger heading back into the Fox merchandise trailer.

My feeling is that Fox, SPEED and even NASCAR are feeling like they got caught being lazy during what was a cycle of green flag pit stops by teams that were not in the top ten. Fox lives for the top ten and this season has focused on the front runners like never before.

Perhaps, this will be a lesson that action continues on and off the track even with the teams that are not among the chosen "TV friendly" drivers that fans see during every single race. With Bristol and Martinsville coming up, the conspiracy theory of this week might just be a very timely reminder.

Thanks for taking the time to read The Daly Planet.
Posted by Daly Planet Editor at 7:00 AM 28 comments: