The Final TV Push To Homestead 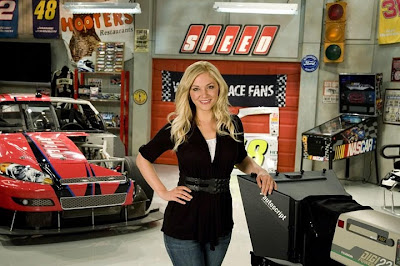 Thursday starts the big push of the two remaining NASCAR TV partners, ESPN and SPEED, toward the championship weekend.

At 1PM ET NASCAR is holding the traditional championship press conference at a Miami area hotel. This is an opportunity to get Jimmie Johnson, Denny Hamlin and Kevin Harvick together for one last media availability before action starts on the track.

This year, SPEED is stepping up with live coverage on TV and online. Danielle Trotta, pictured above, will anchor the event for SPEED on television while SPEED.com will stream the entire press conference. That's the kind of media cooperation from SPEED that NASCAR wants to see more of in the future.

Allen Bestwick cranks-up the Infield Pit Studio at 4PM to host a one-hour preview of the weekend's events on ESPN2's NASCAR Now. Bestwick has Marty Smith and Mike Massaro on the ground in Homestead as reporters. He also has ten other ESPN on-air personalities from which to draw.

Hopefully, ESPN will right a wrong and give the Friday Camping World Truck Series race equal treatment. One criticism of ESPN across the board, especially on college football and basketball preview shows, is that the network focuses only on the games being played on the ESPN family of TV networks. Ask football fans about College Gameday.

The trucks have lots of stories to be told. This is part of a tripleheader arranged by NASCAR to have all the national touring series finish their seasons in this manner. Simply focusing on the Sprint Cup Series is unfair to the Nationwide and Camping World Truck Series drivers, teams and sponsors who have raced all season long.

SPEED has a huge hit on its hands with NASCAR Race Hub. The big decision by Steve Byrnes to come off the road and host this series full time Monday through Thursday has paid tremendous dividends. Driver, owners and sponsors now understand that access to national TV is just a short drive away.

7PM will bring a final preview edition discussing the three weekend races. Ray Dunlap, Hermie Sadler, Bob Dillner and Randy Pemberton will be breaking down the final events in Homestead. SPEED has effectively used in-house talent to do the heavy lifting on big topics, leaving rookie reporter Trotta to cover stories from the team shops and surrounding area.

The good news is that Race Hub will continue for two more weeks after Homestead, the bad news is SPEED has not confirmed yet it will return for 2011. New management at SPEED is now in place and whatever transitions are going to happen will do so in the off-season. TDP will keep you posted.

The complete NASCAR TV schedule for the Championship weekend is posted on the left side of this page. Some items of note are Darrell Waltrip coming back to SPEED's Trackside and RaceDay shows. On Sunday, between ESPN2 and SPEED there are four hours of wrap-up and post-race shows. Let's hope the race lives up to the hype.

This post will serve to host your comments on the Thursday coverage by the NASCAR TV partners. Please tell us what you think about the press conference, NASCAR Now and Race Hub. The push is on and this is the final day to preview the final events.

To add your opinion, just click on the comments button below. This is a family-friendly website, please keep that in mind when posting. Thanks for taking the time to stop by The Daly Planet.