Only Two Races Left For The "NASCAR On Fox" Gang 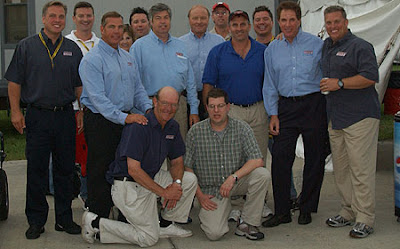 On Thursday afternoon, I was chatting with Dave Moody on his Sirius Speedway show on the Sirius Satellite Radio Network. We got onto the subject of Darrell Waltrip, and how he has been changed this season by the circumstances surrounding his brother. This includes Michael almost losing his life in a single car roll-over accident. We also talked about Larry McReynolds unique interpretation of the English language, and even Mike Joy's all-star performance this year. This all led up to one fact. The NASCAR on Fox gang has two NEXTEL Cup races left, and then they are done for 2007.

After Charlotte and Dover, the TV package switches over to TNT for their version of a summertime TV "replacement" series, as they only carry six races and then they are done. After that, we all wade into the unknown waters of the new ESPN TV package.

It seems that all too soon, we will be lamenting the fact that the Fox gang is gone. This year, it seems that almost all of the parts of the telecast fit together quite well. We objected to the finish line strategy of only showing the winning car or two, but that is their right as the TV network. They never explained why, but we dealt with it. Perhaps, that is something that they might consider changing for next season.

This crew has done all-star work in many ways because of their cable connection with SPEED Channel. People have come to think of Fox and SPEED as interchangeable. When the Fox Network TV package ends, things will change yet again. Even though Larry Mac and DW appear on some SPEED shows, the level of integration and cooperation across the board in the TV world changes after Fox leaves. Without any additional NASCAR programming actually on TNT, we should see the TNT guys on SPEED in the same manner, but we will not. TNT will not share, even if its just for six races. This is the time of the season when the TV package really splits apart. This year, more than ever.

TNT comes to NEXTEL Cup, ESPN hangs-in with the Busch Series, and SPEED continues with the Craftsman Trucks. The fun comes with qualifying, practice, and preview shows. The word "hodge-podge" comes to mind. ESPN does a Saturday Busch pre-race show and a Sunday one hour NASCAR Now. TNT is only doing a pre-race show and nothing else. They are basically letting SPEED's RaceDay offer the Sunday morning two hour live preview "extravaganza." If you have not seen RaceDay, tune in...its worth it.

Very quietly Krista Voda has established herself as solid host when she does the duty for the Craftsman Trucks on SPEED. Unfortunately, SPEED does not originate any other programming in support of this series, and that is a shame. In the same manner ESPN has treated the Busch Series as a minor distraction on the NASCAR Now show, and often times does not even run the highlights on the Monday one hour show. Even last week that practice continued. How very strange.

But, back to the Fox gang and a brief look back at the season. Who knew what would befall Michale Waltrip? Even at Daytona, the drama was beginning. Now, in May, one can argue that he is in deep trouble. At first, Darrell was wrapped-up in his brother's troubles and it affected his performance. He was distracted, off-balance, and said things that we all knew were Toyota related for all the wrong reasons. Now, it seems that his focus has come back to racing, and with Michael making his own problems, DW was great last week. It was nice to have him back, let's hope he keeps this singular focus for two more events.

I mentioned to Dave Moody at Sirius Speedway that I thought Mike Joy was like a good basketball referee. When the game is over, and you never really noticed him, it was the ultimate compliment on his skills. Mike has worked to become a seamless voice on the broadcasts, whether calling the action or directing traffic between the booth announcers and the pit road gang. This year, it has been outstanding. That is truly a voice that will be missed.

Between Larry McReynolds, Jeff Hammond, and the entire crew of pit reporters, Fox has been blessed with some people who really know their business, and it shows. The ability of any announcer to chime-in anytime on the races has been tremendous, and this wonderful style has set-up a stiff challenge for both TNT and ESPN.

Chris Myers has had a tough year. This is only a part-time job for him, and he finds himself surrounded by people who eat, breathe, and sleep NASCAR. He is an "office temp" surrounded by "lifers." This year, that has caused him to be out-of-step with the rest of the group. It did not help that he was stuffed into a window-less tractor trailer in a corner of the garage. That would be the "new" Hollywood Hotel. With all due respect, someone needs to cut a hole in that thing and tell Myers that there is life out here. The man needs a window.

So, for the first time we head off to TNT as ESPN's crew is still getting ready for their ABC Sports telecasts. Suzy Kolber has just been brought in as the pre-race host for both the Busch and NEXTEL Cup series for the stretch run, and that has certainly raised some eyebrows. After the crisis in confidence that has caused NASCAR Now to be a complete disaster, hiring another existing ESPN announcer instead of hiring a NASCAR experienced announcer is a very interesting decision.

Needless to say, part of the Kolber move is that Alan Bestwick is going back to pit road for ESPN on the Busch Series, with no word on his role in NEXTEL Cup. Something is just fundamentally wrong with Mike Massaro and Alan Bestwick on pit road, while the high-profile pre-race show is hosted by the Monday Night Football sideline reporter. But, at least Kolber is an experienced TV pro, and she will be fired-up to give it her best effort.

Finally, good luck to SPEED as they gear-up to handle the All-Star weekend from Charlotte. They finally get their teeth into the NEXTEL Cup series on the track, after making their name dealing with the drivers off the racing surface. We are saving a column for Tony Stewart's pit reporter debut, because we know how much he likes to be told where to stand, what to say, and exactly how much time he has to do all that. Just remember one thing, thank God its cable...

The Daly Planet welcomes comments from readers. Simply click on the COMMENTS button below or email editor@thedalyplanet.tv if you wish not to be published. Thanks again for taking the time to stop by.
Posted by Daly Planet Editor at 11:22 PM 13 comments:

Big thanks once again to Dave Moody and all the gang at Sirius Speedway for allowing me to guest on the Thursday edition. Its always fun to discuss the on-going issues of the NASCAR TV partners as we approach the All-Star break. Even if you don't have Sirius quite yet, check out Dave's blog at motorsports-soapbox.blogspot.com and tell him we sent you. I hope to be a guest again soon. Thanks again Dave and Ryan!
Posted by Daly Planet Editor at 10:57 PM No comments: