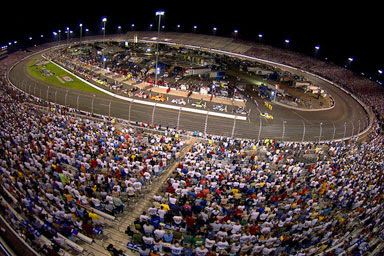 Tonight at 7:30 PM Eastern Time ESPN2 will carry a thirty minute version of NASCAR Countdown, and then the live Busch Series race from Richmond, VA.

This will be the location to post comments about the TV coverage while the programs are in-progress, and after the race. Please limit your comments to opinion and observations about the TV personalities, commentary, or production.

This has proven to be a great place for fans to comment while the race is going on, rather than wait until a full column is posted sometime later. Thanks to all of you for keeping your comments focused and interesting. Let's go racing.

All season long the two different "teams" at NASCAR Now have battled over ESPN2 air time.

The first team is led by Erik Kuselias, and works this sport like a bunch of used car salesmen. Anything and everything is up for hype, and the bottom line is to fill thirty minutes. Nothing in racing is sacred, and respect is a word reserved for Major League Baseball.

The second team is led by NASCAR News anchor Ryan Burr. Since his first appearance on this series, Burr has led an all-out assault on this thirty minute block by his production team to fill the entire time with news, interviews, and analysis.

Friday afternoon, lots of eyes were on the final weekday version of NASCAR Now before the big Richmond weekend. The Chase line-up was about to be decided, NEXTEL Cup was moving to ABC Sports, and the NASCAR news was flowing faster than the James River through Shockoe Slip.

When viewers tuned-in, they were greeted by Ryan Burr in full news mode. Immediately Burr went to Marty Smith in Richmond with real breaking news about David Stremme and Ganassi Racing. Smith hinted at the impending Dario Franchitti switch to NEXTEL Cup, and then filled in as many details as were available.

Burr then announced the AT&T problems with NASCAR were now over, and brought in Stacy Compton and Tim Cowlishaw to talk about these topics. The good thing about Burr is that he is used to being in charge on the air, and keeps talkers like Cowlishaw on a very short leash. He also respects Compton, a trait that Kuselias has yet to master.

Things went directly to the track for the latest practice news, and then an update on Carl Edwards, who is on top of the world in both The Chase and the Busch Series. Once again, Shannon Spake quietly delivered another concise and low-key interview that hit the spot.

Burr worked both Compton and Cowlishaw hard on their opinions of the current Chase format, and the issues involved in the season to date. One key issue is Dale Earnhardt Junior, whose problems were finally kept in perspective instead of hyped.

Spake spoke with Brad Keselowski, who was involved in the wreck of the year last week. Her interview touched on his future, and allowed him to update viewers on his plans for the remainder of the season and next year. This is the type of brief and news-oriented "soundbite" that Burr works into his shows.

One hilarious item was ESPN2 running a pre-taped promo by Dale Earnhardt Junior actually promoting NASCAR Now. Any NASCAR fan who watched the NEXTEL Cup races and pre-race shows for the last couple of weeks knows exactly how Junior feels about ESPN and NASCAR Now's reporters these days. Once again, Junior was not seen speaking directly with any ESPN personality in this show.

Marty Smith, a good friend of Junior, returned with some updates on Mark Martin and DEI. The story of Martin taking over the "eight" car next season is a good one, and possibly Mark is the only driver who could pull this one off with the fans. Both Cowlishaw and Compton "tagged" this story with good opinions about DEI, Hendrick, and Junior.

Burr is not exactly a Drill Sergeant, but he keeps the reporters and analysts on their toes, often by interrupting them and asking his own follow-up questions. This understanding of the content they are reporting, and his ability to push them for details and opinion is the best part of his on-air presence.

In this mode, both on-set analysts and reporters feel comfortable, and that leads to smiles and good conversation. This show is so close to being excellent when Burr is hosting, that the transition back to Kuselias is mind-numbing.

Friday's fast-paced news oriented program is the type that could put ESPN right back into the collective psyche of NASCAR fans as a credible source for racing news and opinion. How hard is it to put Ryan Burr on NASCAR Now full time?

The Daly Planet welcomes comments from readers. Simply click on the COMMENTS button below, or email editor@thedalyplanet.tv if you wish not to be published. Thanks again for taking the time to stop-by and leave your opinion.
Posted by Daly Planet Editor at 6:37 PM 12 comments: