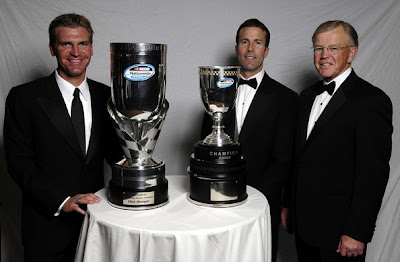 During the off-season, it has been mostly gloomy topics that have dominated the NASCAR scene. The ESPN2 telecast of the Nationwide Series banquet proved to be a pleasant distraction on Sunday afternoon.

Both the Nationwide and Truck Series have recently changed their banquet TV coverage to an old school "Tonight Show" format. On this telecast, it was Allen Bestwick behind the desk as the late Johnny Carson and Shannon Spake sitting to the side and doing her best Ed McMahon. Once again this year, it worked like a charm.

After watching the tightly-wound Bestwick all season on ESPN and ABC, it was a very different TV personality that viewers saw on Sunday. As each of the top ten drivers came over to the "set" to be interviewed, Bestwick related personal stories, teased them about off-track issues and asked each of them at least one hilarious question.

"You're a young guy," said Bestwick to runner-up Brad Keselowski. "Those of us who have been around for a while know that those who wear the Nomex (fire suits) tend to attract women. So, this been a good year for you?"

"Awwww man!" said Keselowksi blushing. "Well...it can always get better," he continued as the crowd roared. "Thanks for that one," Keselowski croaked.

This is "banquet lite TV" with little in the way of real content. It is basically a fast-paced whirl through the drivers with a musical performance along the way. Hardcore fans are once again going to be thrown off-guard, as this show simply skimmed the surface of the season and focused on quick conversations and a couple of brief speeches.

Shannon Spake was in good form and kept her questions to relevant topics. Some drivers talked about the season while others talked about family or real life events. Spake and Bestwick combined to offer a good mix of personalities in this highlights format.

Over the years, NASCAR has struggled to figure out how to translate the post-season festivities to TV. This highlight format basically assumes a small TV audience and is more an hour of conversation than anything else. One has the feeling that a collective "whew, that is over" can be heard as the teams head out for vacation.

This signals the official end of the Nationwide Series season and closes the ESPN coverage for the second year. Bestwick and Spake certainly did their best to keep the mood light and the TV program moving along. The TV schedule for the Truck and Sprint Cup Series banquets is located on the right side of the main page.

The Daly Planet welcomes comments from readers. Simply click on the COMMENTS button below and follow the easy instructions. The rules for posting are located on the right side of the main page. Thank you for taking the time to drop by.
Posted by Daly Planet Editor at 12:42 PM 21 comments:

TV/Media Notes:
Are you watching the Nationwide Series Banquet highlighs on ESPN2?

David Poole is reporting that Ray Evernham has completed his deal to purchase a local short track in North Carolina. That would be a strong indicator that Evernham will be out of GEM shortly and free to fill a broader role at ESPN.

With the recent talks about cutbacks in the TV staffing and facilities for next season, it will be interesting to see how it all shakes out. ESPN has two completely different TV packages. First, they cover the entire Nationwide Series from start to finish. Then, they cover the final 17 Sprint Cup Series events.

Should ESPN decide to downsize the Nationwide Series coverage significantly and bring in a different on-air TV crew to handle the 17 Cup races Evernham could wind-up playing a big role. We will keep you posted.

By the way, if you ever wondered why print reporters should not do TV/video work without a producer, click here for the answer.
Posted by Daly Planet Editor at 9:38 AM 15 comments: