Did You Watch The Sprint Cup Series Banquet? 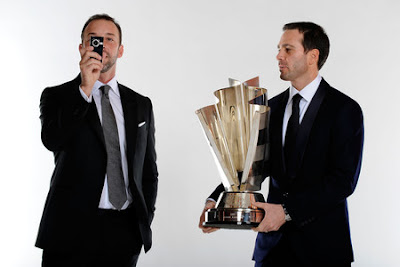 Over the past several years, there have been many changes to the Sprint Cup Series post-season awards show. Now taking place at the Wynn Hotel in Las Vegas, there is a still a substantial buzz that in order to support the struggling NASCAR Hall of Fame, the festivities may be shifting to Charlotte, NC in the future.

On the TV front, NASCAR finally relieved ESPN from the task of trying to slip "the banquet" into a December line-up of college and pro sports. Fans may remember that the awards show had actually been bumped to the infamous ESPN Classic Network.

Last year, SPEED had the rights to televise the banquet fall into the network's lap at the last minute. The scramble that ensued resulted in some off-balance coverage and some hard feelings among fans and the media. SPEED had promoted the coverage as live, but thanks to social media like Twitter and Facebook, fans quickly learned most of the coverage was not.

This year, things are going to be a bit different. The challenge for television is that the post-season banquet consists of parts that don't lend themselves to TV. Take a room full of people eating dinner, for instance. SPEED has to take the start of the festivities and somehow connect it to the awards and performance parts that come later.

SPEED will be recording interviews with those attending as they walk down the hallway into the gala. It's always fun to see NASCAR personalities out of their comfort zone and speaking without a Teleprompter. It's also nice to feature some wives and girlfriends on this special night.

Those red carpet interviews from Krista Voda and Kenny Wallace will be mixed with some edited features helping to recap the season and highlight some memorable moments. Steve Byrnes and Jeff Hammond will be hosting this part of the program. Hopefully, the interviews will be a new and exciting part of the telecast.

Once TV goes inside the room, it will once again be Voda and Mike Joy hosting the on-stage portion and directing traffic during the awards ceremony. This year, SPEED will carry Martina McBride singing the national anthem to open the banquet. That will be quite a change from the anthems viewers had to endure this season.

The other artists appearing on SPEED will be Rascal Flatts, Colbie Caillat, Eric Lewis and the Las Vegas version of Cirque de Soleil in a show appropriately called Viva Elvis. Comedian Frank Caliendo will once again be appearing in a comedy and hosting role.

During the season, SPEED covers qualifying by using what we have come to call the "TiVo" method. To make sure every car is seen on TV, SPEED continues recording and calling the action while viewers are away in commercial. After the break, the TV crew just hits play on the DVR and the coverage picks up right where it left off.

In terms of the banquet, SPEED has the same challenge. Just like qualifying, the awards presentations and speeches do not pause for TV timeouts. It's up to SPEED to break away to commercial, continue recording the live action and then just press play out of the commercial break.

The good thing is that NASCAR fans will get to see everything that happens. The thing that may upset some folks is that this format pushes the live action slowly back until there is a delay between what is actually happening live and the TV coverage. It's a no-win for TV. Show it live and miss the action in the commercials or show everything and get slightly delayed.

Since we know the finishing order of the top ten, there are going to be few surprises along the way. I would rather get to see all the content and wind-up later than the live action as opposed to missing two or three minutes of content during every single commercial.

No matter what the arguments of the past have been, NASCAR needs to design portions of this evening with live TV, radio and online video streaming in mind. It's an interactive social media world and this event could be huge if done correctly.

If you have ever wanted to try Twitter, which is free by the way, Friday would be a great day to sign-up. It's fast, easy and the program can appear on your phone, iPad, laptop or desktop. There will be a ton of reporters, team reps, relatives and fans sending all kinds of unique pictures before, during and after the event.

We will use this post to offer comments on the prerecorded Nationwide and Camping World Truck series banquet show at 7PM as well as the 9PM Sprint Cup Series program. To add your comment on this topic, just click on the comments button below. This is a family-friendly website, please keep that in mind when posting.

Thanks for taking the time to stop by, it's been a long season and we appreciate your participation.