Where Is The Real Tiregate Video? 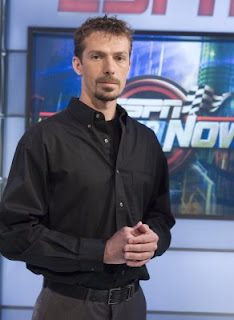 Fan favorite and ESPN pit road analyst DJ Copp appeared on the late night Monday version of NASCAR Now. Host Allen Bestwick ran him through the scenario that found Copp right in the middle of the pit road tire incident from Sunday that changed the complexion of the event.

Copp is a tire changer for the #47 team of Marcos Ambrose and was actively involved in the pit stop that set all the chaos into motion. Over the past two seasons, it has been the plain-spoken Copp who is often the voice of reason when pit road incidents are being discussed on the program.

On Monday, Copp made several effective and simple points. Ambrose stopped a bit short in his pit box, which caused the rear tire to cross-over into Paul Menard's pit box after it was removed and rolled toward the wall. Copp reinforced that it was the Ambrose crew chief who alerted the team to the fact that a tire had come loose and asked them to go retrieve it.

The interesting part of Copp's interview was his statement that a Menard crew member had taken the slightly wayward Ambrose tire and purposefully rolled it out onto pit road. His suggestion was that rising tension between the crews during the race had resulted in this action.

From a TV perspective, all of this leads to a very simple question. Keeping Copp's statement in mind, where is the video of the incident? The single replay offered by Fox at that moment simply showed the tire rolling and then the crew member appeared running to retrieve it. Somewhere, there is much more.

As veteran fans know, in addition to the more than seventy TV cameras aimed at the race track from every different angle, each team records their pit stops for training purposes. This type of video has been used countless times in all kinds of NASCAR TV shows.

There is also a blimp or helicopter flying over all of the Sprint Cup Series races and providing a great overhead view of pit road, especially during pit stops. Finally, the NASCAR Media Group has additional hand-held cameras on pit road. Fans may remember one of them being involved in a little pit road incident last season.

From all these different and diverse video sources, somewhere there has to be a little better accounting of what really happened on pit road Sunday afternoon. While NASCAR has chosen to penalize the Ambrose crew member and the crew chief, perhaps as the late Paul Harvey would say, we should stay tuned for the rest of the story.

It should be interesting to see if it is ESPN, SPEED or NASCAR itself that finally comes up with the video that can back-up the statement from Copp and others that the reality of what actually happened does not quite match-up completely with the penalties NASCAR imposed.

Fans present at Atlanta who may have been shooting video during the pit stops should check their cameras, perhaps it may be a fan who can provide the information to finally set the record straight.

Eventually, the Menard team's potential interference and purposeful disgregard for safety on pit road will either be proven true or false. It might just be one little piece of video that tells the tale.

TDP welcomes comments from readers. Just click on the comments button below. This is a family-friendly website, please keep that in mind while posting.

Thanks again for reading The Daly Planet.
Posted by Daly Planet Editor at 5:00 AM 41 comments: