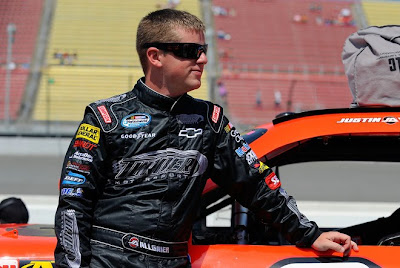 Marty Reid is once again off in IndyCar land. So, it will be Allen Bestwick calling today's Nationwide Series race from MIS with Rusty Wallace and Andy Petree alongside.

Nicole Briscoe steps into the Infield Pit Studio with Ricky Craven and Wallace. Dale Jarrett and Brad Daugherty are off this weekend. Down on pit road are Mike Massaro, Shannon Spake, Dr. Jerry Punch and Dave Burns. Tim Brewer will be in the Infield Tech Center.

This is one of those weekends when NASCAR gets a nice exposure for the Nationwide Series on ABC. While there are other sports in progress, there is no NBA, NFL and the NHL season is now over. Great opportunity for some quality exposure.

Nationwide Series regular Justin Allgaier is the in-race reporter and ESPN has a solid number of in-car cameras for this event. MIS is often a fuel mileage race and it takes some consistent work from the guys in the TV truck to keep it interesting for viewers.

This post will serve to host your comments about the ABC coverage of the Nationwide Series from MIS. To add your opinion, just click on the comments button below. Thanks for taking the time to stop by.