A New York State Of Mind 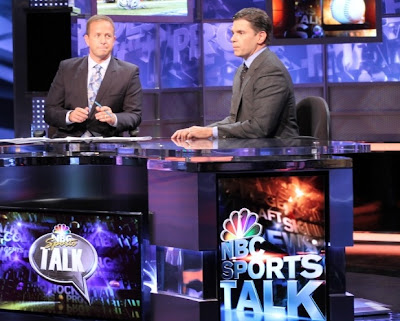 Update: Tuesday morning NBC Sports Talk confirmed it had booked Danica Patrick and will be opening the door for NASCAR content. Great news.

The conversion of VERSUS TV into the NBC Sports Network is complete. The concept behind sinking tens of millions of dollars into creating a major cable sports network is easy to understand. NBC wants a piece of what ESPN already has.

In addition to working hard on buying the rights to live events and promoting the Olympic agenda, one piece of the ESPN pie is already under attack. Despite airing for more than twelve hours daily on several ESPN networks, SportsCenter has become a parody of itself.

Originally intended to be a way to effectively get highlights out to sports fans nationwide, time has long since left this concept behind. While the 1980's were tailor-made for distributing sports highlights via cable TV, technology has changed the entire sports media landscape.

SportsCenter now uses a seemingly endless cast of in-house experts to try and entice fans to spend time watching cable TV. It's a tough sell. Smart phones, laptops and an endless number of league and team websites offer the same video content with even more official footage and information.

The SportsCenter franchise worked best when it was limited in time on the air and driven by memorable anchor personalities. Now, it's a TV factory and has much the same feel as watching CNN Headline News (HLN). After a while, it's obvious the same content is being played-back off the hard-drives with different faces reading the teleprompter.

As NASCAR fans know, the struggle we have detailed for the past six years is the inability of SportsCenter to integrate NASCAR content into the mix. Whether airing a preview, conducting a live interview or showing highlights, the animosity between many of the SportsCenter anchors and NASCAR is plain to see.

It's still a badge of honor to be anti-NASCAR in Bristol.

NBC Sports Network's daily news show is called SportsTalk. Anchored at 6PM by Russ Thaler, the one-hour weekday series focuses on the exact same content as SportsCenter. That is Thaler pictured above on the left with Pro Football Talk's Mike Florio. The twist on SportsTalk is in the diversity of personalities on the program.

Thaler draws not only from the heavy-hitters at NBC like Bob Costas, but also from diverse sources like Sports Illustrated, Yahoo! Sports and the Comcast regional sports networks. Where SportsCenter is limited to the ESPN family, SportsTalk is thriving by including rather than excluding journalists and reporters. There are, however, some growing pains.

Last week, there was not a word about NASCAR on the SportsTalk program. Michael Phelps and Misty May-Treanor stopped by to push the Olympic agenda while journalists of all kinds talked stick-and-ball sports non-stop.

While ESPN is deeply invested in the Red Sox, Yankees and now Tim Tebow, NBC is even more deeply furrowed into its own sports cave. Where NBC Sports is concerned, it's a New York state of mind. That's New York City for those of you without a Billy Joel CD in your collection.

Click here for the NBC Sports homepage. NASCAR can be found by going to the "More" tab, then the "Motorsports" tab and finally the "More on NASCAR" section at the bottom of the page. The most updated story not from a wire service is on Dale Earnhardt Jr. being named most popular driver. Don't click on it, because the link has long since been removed.

If NBC wants the new NBC Sports Network and the flagship SportsTalk show to be taken seriously, there had better be some effort put into freshening the NASCAR content in a timely fashion. The sport is coming off its most successful championship title fight in years and boasts a diverse group of ongoing stories as the season gets underway.

There was a time when NASCAR fans had fond memories of NBC. It was 2006 when the network parted with the sport after a six year run. Now, the challenge for the new-look NBC Sports Network executives is to reach out far beyond the Hudson River line and create a NASCAR state of mind.