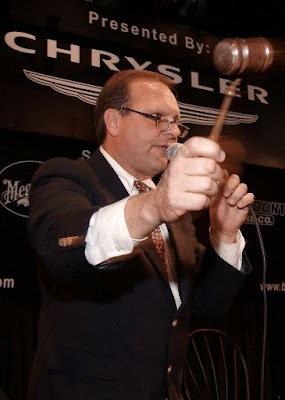 The recent buzz about the turnaround at ESPN's NASCAR Now and the changes that network made to the TV team at the tracks has not gone un-noticed.

Fox Sports and the SPEED Channel folks have aimed their "TV sights" directly at Martinsville, Virginia. With no Nationwide race scheduled, Fox, SPEED and NASCAR would normally be the stars of the show.

Fortunately or unfortunately, depending on your point of view, this is also the big weekend of the Barrett-Jackson auto auction in West Palm Beach, Florida. As you may remember from last year, SPEED shows a whole lot of that live. Here is a rundown of the weekend from a NASCAR standpoint.

The NASCAR on Fox production team will be handling the duties for both the Craftsman Truck and the Sprint Cup Series telecasts from Martinsville. While the Truck Series announcers will essentially be the same, the entire TV crew will be from Fox. This group will also host the Truck and Cup telecasts of practice and qualifying. Both the Truck and Cup races will be on the big Fox Broadcast Network.

Friday at 11AM Eastern Time the Truck teams kick-off a one hour practice session that will be carried live on SPEED. Because of the auction, the NASCAR action does not return until 3PM for the Go or Go Home Show. This program is supposed to recap the situation with the teams outside the Top 35 in points, but often strays back into interviews with the "stars" of the series.

At 3:30PM, the Fox crew televises Sprint Cup Qualifying that is scheduled to last until approximately 5PM on SPEED. At that time, the network continues NASCAR coverage of the Truck Series final practice.

Trackside wraps-up the NASCAR portion of SPEED's Friday with a good program scheduled for 7PM. Steve Byrnes hosts as usual, joined by Darrell Waltrip, Larry McReynolds and Jeff Hammond. This week, the show welcomes Jeff Gordon, Clint Bowyer and Jamie McMurray. That is a lot jam-packed in a one hour live program.

Saturday, the Trucks qualify on SPEED at 10AM Eastern and then a flexible NASCAR Live program will take the network back to Noon and the auction once again.

The Trucks will race on Fox at 3PM Eastern Time on Saturday, and are scheduled in a two and a half hour broadcast window. This should be an interesting event with several storylines playing out, and the exposure on Fox will be good for the series.

The Rolex Sports Cars own SPEED at 6PM, and after a three hour race the NASCAR programming returns. SPEED puts the final Cup practice on from 9 to 10PM, and then NASCAR Performance hosted by Larry McReynolds is next for thirty minutes.

NASCAR fans should make this note. Set the DVR or the VCR or the TiVo for 10:30PM on Saturday night. The one and only Bob Pockrass will be visiting Kyle Petty and John Roberts as the media guest on Tradin' Paint. Bob is a NASCAR writer for scenedaily.com and he and Kyle are like oil and water.

This combination, when controlled by Roberts, has been one of the most entertaining on Tradin' Paint in years. Both men have strong viewpoints and very different personalities. With Mr. Roush on the topic list, it should be interesting.

On Sunday, SPEED returns at 11AM with the quirky NASCAR in a Hurry program that uses footage from the weekend to review the action on the track and on SPEED. This is an interesting program that more resembles CNN Headline News than anything else. Thirty minutes of review and then gone. Truck Series veteran Adam Alexander hosts.

RaceDay then follows at 11:30AM for two hours of live interviews and features. John Roberts hosts, and this week Jeff Burton, Carl Edwards and Aric Almirola will be guests. Wendy Venturini's Real Deal feature focuses on Kasey Kahne and Ray Evernham.

The NASCAR on Fox crew take to the air at 1:30PM for the Sprint Cup race, and then SPEED closes-out the evening with Victory Lane at 8PM. It certainly should be interesting to see who John Roberts, Jimmy Spencer and Kenny Wallace get to interview after this event. Toyota vs. the rest of the field is the storyline.

There will be posts available for in-progress comments, and fans should be watching to see how the Truck Series translates to the Fox Network airwaves on Saturday.

The Daly Planet welcomes comments from readers. Simply click on the COMMENTS button below and follow the easy instructions. Thanks again for stopping by.
Posted by Daly Planet Editor at 7:19 PM 39 comments: