Tough Times For ESPN At Talladega 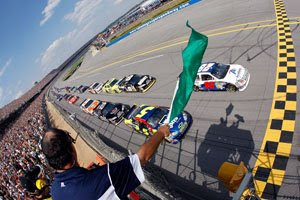 Last season was the first year of ESPN's return to NASCAR. Click here for the TDP column that described the network's effort at televising the 2007 Talladega race.

The headline was "ABC Struggles With Multiple Storylines at Talladega." On Sunday, Dr. Jerry Punch did his best to make sure that ESPN repeated this script. As Yogi Berra once said, "this is like deja vu all over again."

Allen Bestwick had Ray Evernham added to his regular Infield Studio panel of Rusty Wallace and Brad Daugherty. The direction of the network coverage continues to be singularly focused on accidents at Talladega. Bestwick introduced this concept after an opening sequence that featured very old ESPN footage of...more accidents.

While Brad Daugherty did his best to get the viewers pumped-up, having Evernham on the panel threw things off-balance. Wallace and Daugherty have their act down pat and each has fun with the other. While Evernham might be good on Monday's NASCAR Now, the infield setting does not need his serious technical knowledge.

Over the past several weeks, Bestwick and his two panelists have been welcoming various drivers to the studio and letting Daugherty and Wallace talk with them directly. That has been working well, so the decision to end that practice and add Evernham to the panel was strange at this critical time of the season.

Back in September, TDP offered a column about Dr. Jerry Punch. Click here to read it. Basically, ESPN took a college football sideline reporter and put him in the lead NASCAR play-by-play position. The results have been disastrous.

If this was a stick-and-ball sport on ESPN, Punch would have changed assignments a long time ago. But, the fact that Punch worked on ESPN's NASCAR coverage over a decade ago has kept him hanging-on this season.

After the huge build-up of the pre-race, Punch again slipped almost immediately into his reporter role. He asked questions of his analysts and offered observations instead of focusing on calling the action and providing the excitement of high-speed racing at Talladega.

The result is kind of a random play-by-play commentary that is mostly offered by Jarrett and Petree. Punch quickly settled into calling-out the car numbers and driver names over-and-over again. ESPN went to the first commercial break before lap ten.

The ESPN on ABC gang settled into a rhythm of zooming-in on the leaders of the race. As almost all fans know, that is meaningless at Talladega. Then, the camera would select a driver and one of the ESPN pit reporters would offer a nugget of information on that team. At Talladega, this was also meaningless.

This pattern sucked the life out of a race that used to be one of the most exciting of the season. Frequent commercials were inserted without any effort from Punch to add a shred of excitement to this two and three wide racing action.

Prior to the first pit stop, viewers could only look at the ticker on the top of the screen to know who was where. The ESPN on ABC broadcast was totally off-balance and loaded with scripted material and camera angles that did not tell the story.

Jimmie Johnson losing the draft early-on did not fit into the ESPN script and threw the crew for a loop. When they finally decided to cover this story, the lead changes and racing was ignored for a problem that had been in-progress for many laps. Both the radio broadcast and the DirecTV Hot Pass coverage had been with this situation from the start.

When first "big one" happened ABC was in commercial break. TV viewers returned to single shots of crashed cars and the announcers talking about what happened as if the viewers had seen it. The coverage made absolutely no sense as continued camera shots of individual cars were shown.

Punch led to the replays and turned the telecast over to Jarrett and Petree as he does so often. He never explained to the fans why ABC did not return live as the incident happened. Jarrett and Petree filled-in the blanks for the viewers, but were mostly limited to the in-car and tight angles that ESPN had chosen for the race coverage.

As soon as possible, the Producer turned the coverage over to Allen Bestwick. The red flag was out, and Punch is not the man to handle this delay from the booth. Bestwick led a discussion of the event and a recap of the race. The ESPN pit reporters followed-up on the drivers out of the race, but once again the choice of questions was curious.

When the action returned, ESPN dug out Draft Track and explained to NASCAR fans who have been watching the sport since February the fundamentals of drafting. Dale Jarrett did a good job, kept it short and put this gizmo back on the shelf.

At the halfway point, Bestwick returned to try and inject some excitement into the telecast. Daugherty and Wallace had been strangely silent during the action and even Evernham jumped-in with some opinions. Bestwick tried his best to offer a full field rundown with good humor and the help of the pit reporters.

The tire problems that became apparent as the race progressed were not followed-up by the pit reporters. They were also not put in any kind of perspective by Punch. It was only Bestwick during an infield segment who said repeatedly that Goodyear reps had refused to come on camera and talk about the situation.

The hard crash of the race was Denny Hamlin. While the telecast had the replays, ESPN chose to leave and cover the caution flag pit stops. While Jim Hunter from NASCAR updated the Hamlin situation on the radio broadcast, ESPN simply passed along that Hamlin was alert and talking. As the network went to commercial while Hamlin was loaded in the ambulance, rock music blared as the network followed the script once again. One fan simply emailed us the word...tasteless.

It was with 55 laps to go when a Goodyear spokesman finally addressed the single biggest issue of the race. Dave Burns asked good questions, but was unable to get anything of substance from the rep. The tire questions went unanswered.

The challenge of Talladega is to show the full field or the bunched pack lap-after-lap. ESPN consistently focused on one car and would zoom-in to that car or cut to the in-car camera. The problem with that is the race perspective is lost. Many times, by the time the network returned to the race, the lead would have changed hands and the reason why was never explained.

Petree and Jarrett have worked well with each other to address the issues that the Producer points in their direction. Both have also taken it upon themselves to interject on a continual basis the real action on the racetrack. They truly do provide the play-by-play for these races.

The final runs began with 19 laps left and Punch failed to raise his voice or set the table for the fans. Punch was talking about Casey Mears' girlfriend having a baby and Paul Menard leaving DEI. Jarrett stepped-in and talked about the top cars being seen on the TV screen.

The second "big one" took the air out of the any remaining possibility of excitement where the race telecast was concerned. After the replays of Edwards turning Biffle, it fell to Shannon Spake to speak with Jack Roush. Her single question was "what did you see happen?" Roush was diplomatic in his response, but the mystery of what happened was not the issue.

The restart and final runs put the telecast well beyond the scheduled off-time. Petree and Jarrett worked well to layout the options for the remaining drivers. The pit reporters spoke with several crew chiefs to try and set the field.

Two short runs finished the day, but even with a smaller number of cars the ESPN on ABC Director showed mostly the leaders and used in-car cameras frequently. The fan frustration had to be at a climax with the lack of full field coverage and field rundown. Who was actually racing in the lead pack was rarely made clear.

What was even less clear was the finish. Punch did not know the rules and confusion was everywhere. Jarrett and Petree offered opinions, but the rules were explained in the driver's meeting and ESPN should have been able to quickly settle the matter.

Punch was once again absent at a critical time and another call of the final lap was blown. How much more of this ESPN and NASCAR can take is anyone's guess. The 2008 October race at Tallageda will certainly be known for a lot of incidents. Not all of them were on the track.

The Daly Planet welcomes comments from readers. Simply click on the COMMENTS button below and follow the easy directions. The rules for posting are located on the right side of the main page. Thanks for taking the time to drop by.
Posted by Daly Planet Editor at 3:25 PM 185 comments: 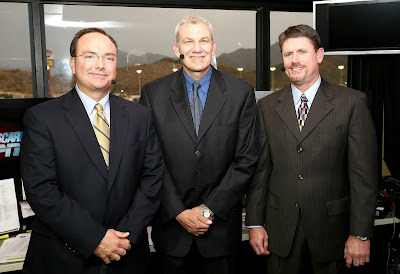 SPEED has handled the pre-race action of practice and qualifying this weekend. Sunday afternoon at 1PM will be the first time viewers will be seeing the ESPN on ABC crew.

Allen Bestwick will start the ball rolling with Brad Daugherty and Rusty Wallace from the Infield Pit Studio. The NASCAR Countdown pre-race show should be interesting with Daugherty having just completed a deal to become a satellite team of Michael Waltrip next season in the Cup Series.

Other than The Chasers, there are some names at the back of the field like Terry Labonte and Kenny Wallace that may be a factor before the race is over. Not necessarily in winning, but in helping someone to achieve that goal.

Last season, ESPN was fascinated by "the big one" and said it over-and-over again during the pre-race show. Lost in the shuffle was the actual story of the race field and what viewers could expect other than accidents.

Dr. Jerry Punch will take over at 2PM and begin the race coverage. He will be joined as usual by Dale Jarrett and Andy Petree. Tim Brewer will be in the Tech Center. Down on pit road will be Shannon Spake, Jamie Little, Dave Burns and Mike Massaro.

It is very hard for the announcers to see the backstretch, so they will be basically watching the same pictures as the viewers at home when they are calling the action on that part of the track. The choice of whether they look out at the track or continue to follow the TV monitors in the booth for the other racing should be easy to determine.

The COT has shown both a tendency to allow two cars to run fast when hooked-up just right and to make for boring racing during the early parts of this race. If teams hang back and gather together it will be up to the ESPN crew to choose to inform the viewers or ignore it.

The TV gang has been making great use of the double video box effect that allows the race to continue for the viewers even as Brewer talks tech or a crew chief is interviewed. Look for increased use of the aerial shot and the speed shots, especially after a restart.

This post will serve to host your comments about the ESPN on ABC presentation of the Sprint Cup Series race from Talladega. To add your TV-related comment, just click on the COMMENTS button below and follow the easy instructions. The rules for posting are located on the right side of the main page. Thanks for taking the time to stop by The Daly Planet.
Posted by Daly Planet Editor at 11:56 AM 818 comments: