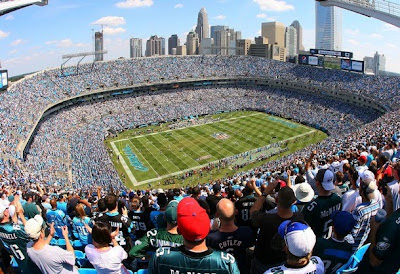 The enemy has arrived and quickly made its presence known. That is the Charlotte, NC skyline peeking above the home opener for the Carolina Panthers. After a short run of slightly higher TV ratings, the bottom fell out for NASCAR on the first weekend of the head-to-head match-up with the NFL.

As we said last week, it was Allen Bestwick and his NASCAR Countdown pre-race show that first went up against the Sunday 1PM Eastern Time NFL game. Jerry Punch then led his crew into the fray when the race from Loudon, NH began shortly after 2PM. It seems that by then, the damage was already done.

Despite the double file restarts "shootout style" and the compelling stories of Mark Martin and Juan Montoya, the NASCAR TV ratings got thumped. Here is the official information:

Overnights are the first set of ratings information that becomes available. There will be a more detailed breakdown of this mess available shortly. Needless to say, there are always lots of factors that affect the ratings associated with live sports.

Click here to read the original announcement from NASCAR about creating the Chase for the Championship. Notice that it does not mention the NFL. Despite that fact, make no mistake that the mortal enemy of NASCAR plays Sundays on a 100 yard field and takes three hours of TV time to finish just one game.

The Chase debuted well, but has struggled. Click here for a very good column from Ernie Saxton of Phillyburbs.com about some of the reasons why things have gone astray.

Several weeks ago, Art Weinstein of scenedaily.com offered a column about NASCAR and the NFL. Click here to read it. His point was that the NFL has some problems of its own. On the flipside, NASCAR's problems with the Chase have also been around for a while. Click here for Richard Chang in the New York Times back in 2007.

The bottom line is that the NFL is currently on the kind of roll NASCAR enjoyed a decade ago. The NFL as a whole has momentum and is well supported by event coverage on both broadcast and cable TV networks. A short while ago, the NFL Network also debuted and has been working very hard to develop an identity of its own.

As the Internet allows coverage of sports to expand, the NFL has done a wonderful job of coordinating an amazing amount of coverage for its product on and off the field. While the internal dynamics of the league are completely different from NASCAR, one thing has not changed. The NFL is still the thorn in NASCAR's side during the final three months of the racing season.

Perhaps, you might be able to take a moment and tell us about the decisions you made in terms of watching NASCAR or the NFL this past Sunday and why. Please also feel free to offer your opinions about how the Chase translates itself to TV with the NASCAR on ESPN team presenting all ten of the Chase races on ABC.

To add your opinion on this topic, just click on the comments button below. This is a family-friendly website, please keep that in mind when posting. Thank you again for taking the time to stop by The Daly Planet.
Posted by Daly Planet Editor at 11:00 PM 92 comments: