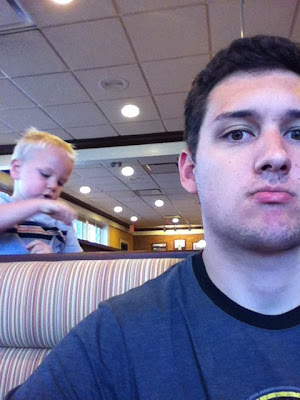 The funny picture above is Nationwide Series driver Brad Coleman tweeting from his iPhone on the road. He's trying to eat and the little kid in the next booth is going nuts. We've all been there.

Chairman Brian France says the second-tier series likely will have new rules aimed at limiting the dominance of Sprint Cup drivers. Those moonlighting from the premier circuit have won 16 of 17 Nationwide races this season (most recently Dale Earnhardt Jr. at Daytona International Speedway). The top two in the standings are Brad Keselowski, who is running his first full Cup season, and Carl Edwards, who is in his sixth consecutive season of running full time in Cup and Nationwide.

It's been five years since there was a Nationwide champion (Martin Truex Jr.) who didn't run Cup concurrently.

"There's such a concentration of Cup drivers, which we like on one hand, but we want to make sure that division is our version of college football," France said. "We need to make sure the stage is not crowded so much so that we can't give opportunities to Nationwide young regulars who need that experience."

Click here to read the full story. Ryan's report tells the tale of a series that has been struggling on TV for years. There are two key reasons why.

First, the dilemma for ESPN and NASCAR is the choice between promoting Sprint Cup Series drivers racing in the Nationwide Series over fresh faces like Coleman and other "regulars." TV viewers recognize and appreciate the Sprint Cup drivers, but their participation in superior cars and with superior skills sometimes makes the actual races less than competitive.

NASCAR needs to have a platform for developing young drivers and providing them an opportunity to do more than just fight for the first spot behind the Sprint Cup guys. It's now a race within a race and has been for several seasons.

So, what does the Nationwide Series become as a TV property if fulltime Sprint Cup Series drivers are limited in participation or points? It appears we may find out.

The Nationwide Series is the only NASCAR series that ESPN carries for the entire season. Needless to say, the network has a vested interest in what decisions are made going forward. This seems strange, because the second and biggest problem the series faces is caused by ESPN itself.

When September rolls around, the Nationwide Series become nothing more than a distraction jammed between two Saturday afternoon college football games. The entire ESPN2 network comes to a screeching halt while the race is run and then the college football mania resumes.

Time after time, the NASCAR Countdown pre-race show is shortened or eliminated because of ESPN's college football commitments. This compounds the problem of getting exposure for Nationwide "regulars." Once the football game ends and the race coverage starts, the ESPN cameras follow the Sprint Cup Series drivers with the high dollar teams as they continue to dominate.

It seems ironic that France would reference college football in his quote. Since 2007, any momentum that the series has built up was quickly drained when ESPN switched it's time, effort and resources into the Sprint Cup Series and the Chase for the Championship.

Click here for a 2008 column titled "Nationwide Series Returns To The Back Burner." Even in year two of the new contract, ESPN had sliced and diced the last few months of the Nationwide Series races with a TV Ginsu knife.

The network's focus was on the Cup side and the Nationwide Series was left to fend off overtime college football games and scoreboard shows. So, perhaps despite NASCAR's best intentions to change the cast of characters, the key issue is guaranteeing TV exposure for the final three months of the season.

Can we get your opinion? If the Cup regulars were gone from the Nationwide Series races, would you lose interest or make an effort to watch the new faces on TV?

If the September through November Nationwide Series races were offered free on NASCAR.com or streamed on ESPN3.com, would you be more inclined to watch knowing college football would not interfere?

Finally, does the lack of any dedicated Nationwide Series feature TV programming on ESPN or SPEED play a role in your interest in the series? Would a weekly reality or talk-show style TV series make sense to help the series grow? What other ideas would you suggest to help develop a viable second-tier series for TV?

To add your comments on these topics, just click on the comments button below. We are trying to focus on the TV aspects of the issues, please keep that in mind when posting. Thank you for taking the time to stop by The Daly Planet.
Posted by Daly Planet Editor at 1:00 AM 35 comments: