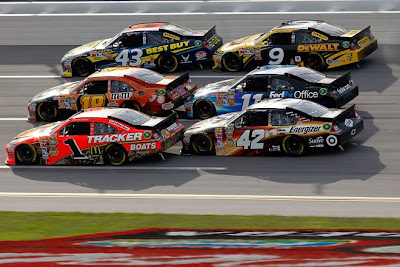 It was going to be an interesting weekend. Many believed that might be true despite the lack of racing in this new two-car tandem scenario at Talladega.

Nicole Briscoe hosted the pre-race show with Rusty Wallace and Brad Daugherty. Briscoe and her husband, IndyCar driver Ryan, were friends with the late Dan Wheldon and his family. Briscoe worked her way through a tough segment dealing with the recent racing deaths and the risks faced by drivers. Her emotion was very real.

Wallace and Daugherty often reinforce what each other are saying, but for some reason Daugherty was on the Dale Earnhardt Jr. bandwagon. This might not have been bad, but Daugherty kept calling Earnhardt "Junebug" over and over again. It was very strange.

Wallace tried to elicit a reaction from Matt Kenseth, who was an in-studio guest on the perception that Kenseth was essentially....boring. Kenseth would not bite. Wallace is not having a very good Sprint Cup Series season on TV. Perhaps the different dynamic of having Briscoe hosting has affected him.

Allen Bestwick had his work cut-out for him. The tandem racing at Talladega looked more on TV like two cars trying to avoid collisions with one guy driving blind than actual racing. The incidents on the track happened when partners had a problem, not from racing for the lead or position.

Bestwick was accurate and informative, not sugar-coating the lack of racing on the track. The task was to do the best with what was going on and that was accomplished. This is the track where tension between ESPN and NASCAR first became public. A lot has changed since that time.

"It is what it is" has become a catch phrase used to try and explain this type of racing. Dale Jarrett and Andy Petree never made it an issue, just tried to keep the viewers up to speed with the wide variety of agendas being used by the various tandems during the race.

This style of racing forces ESPN to say wide with the cameras as the tandems demand coverage of a "clump" of cars and not just one or two. The "hyper-tight" style of ESPN could not be used. Instead, the wider views made the video watchable and the use of the larger side-by-side video box for more features within the show was a plus.

Tim Brewer tries his best, but sometimes his explanations are just hilarious to a fan base that has watched the sport since February. Many of us have been fans for a very long time, so repeatedly telling us about the fundamentals of the sport is pointless. Give him credit, he is enthusiastic about his role on the telecasts.

The lack of incidents left the pit reporters out in the cold. There simply was not much to do and the cars that came off the track and into the garage were being fixed to return. Even a late caution that caught ESPN in a Nonstop commercial resulted in two cars being parked but no real stories to follow-up.

The final 11 laps were another pushing and shoving match between couples. Regan Smith showed the random nature of being involved in an accident in this style of racing. Luckily, he avoided injury. A late solo move by Clint Bowyer after a break-away with Jeff Burton won the race.

ESPN ran though the standard post-race interviews. There are certainly going to be a lot of new stories emerging in the media over the next couple of days. TV had a tough time keeping up with all the changes on the final restart.

This post will serve to host your comments on the ESPN coverage of the Sprint Cup Series race from Talladega. To add your TV-related comments, just click on the comments button below. Thanks for stopping by.