"NASCAR Wives" TV Series Would Have Been A Hit 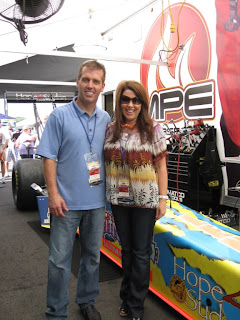 There are not a lot of comments out there about why the highly promoted NASCAR Wives TV series never materialized. TLC network declined to respond and the silence from the other parties involved continues.

Big names included DeLana Harvick and Kelley Earnhardt Elledge. TV viewers may remember the Harvicks as appearing regularly on an earlier NASCAR TV reality show offered on SPEED. Their story of total immersion in racing and the intensity of their business efforts is well known.

Elledge was in the show as a divorced mom who was handling her brother's business interests while trying to live her own life in the spotlight. It would have been interesting to see how a struggling brother interacted with his big sister away from racing.

While other cast members would have also shed a brighter light on life away from the track, there is one name that certainly would have been front-and-center. Shana Mayfield was set to document the struggles of Mayfield Motorsports as this upstart bunch tried to push their way into the Sprint Cup Series on a shoestring.

Now, she finds herself in the middle of a media story that will not go away until her husband clears the air once and for all. Wednesday, host Shannon Spake read a statement on NASCAR Now confirming that Shana will step-in as the interim owner and that her husband will be making his own announcement on Friday.

TLC called NASCAR Wives a docusoap. This type of popular TV program mixes slices of real life with edited footage that has been staged. Often, that consists of the cast members speaking directly into the camera and delivering first-person opinion and comment.

Imagine what a door this would have opened to the inner-workings of NASCAR where the Mayfield drug suspension is concerned. Viewers would have been with both Shana and Jeremy as the first driver suspended under the new drug testing policy went through the process.

TDP has pointed-out the lack of long-form NASCAR programming on TV for the last three years. Now, with this high-profile series simply fading away NASCAR again looks like it has something to hide, regardless of the reality.

Millions of primarily female fans watch the docusoap offerings on TLC and other cable networks. Establishing a new fan base outside the group of current NASCAR TV partners may have brought new TV viewers to the sport at a time when the Sprint Cup Series could sure use a boost.

However it happened, it certainly is a shame that the only NASCAR wives fans will be seeing anytime soon will be once again standing on the starting grid during the National Anthem and smiling politely for the camera.

TDP welcomes comments from readers. Just click on the comments button below to add your opinion on this topic. This is a family-friendly website, please keep that in mind while posting.

Thanks for taking the time to stop by The Daly Planet.
Posted by Daly Planet Editor at 5:00 AM 36 comments: 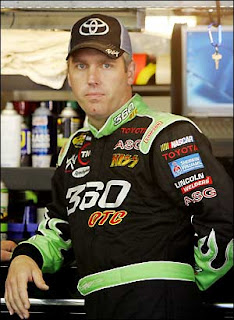 Updated: Well, here we go. NASCAR's chief of its new drug testing program has directly commented on Mayfield's assertions that allergy medication causing him to fail the random test in Richmond. What Dr. Black says is not good:

"What we have is a clear violation of policy," said Dr. Black, whose Tennessee-based Aegis Labs conducts NASCAR's random testing program. "In my many years of experience, I have never seen a violation like this due to the combination of over-the-counter or prescription products."

Black, citing NASCAR policy, declined to specify what caused Mayfield to test positive, saying it was "a drug of concern."

Well, this puts the media spotlight on several TV networks. First, SPEED for teasing coverage of the 6PM press conference on RaceDay and then putting a joking Hermie Sadler and three drivers on the air for a very long but completely pointless interview about the upcoming All-Star race...on SPEED. The network never covered the press conference live or asked follow-up questions.

Reporter Wendy Venturini offered a live report afer the press conference where she reviewed the details. Jimmy Spencer and Kenny Wallace then offered ill-advised comments on this issue. What SPEED should have been doing was switching over to "news" mode and making this a topic immediately. It never happened.

Sunday night, SPEED offered Wind Tunnel. Host Dave Despain had Kenny Schrader in the studio who declined to address the issue. Despain fancies himself a journalist, but failed miserably on this issue. Indy and open-wheel dominated once Despain and Schrader were done with a Denny Hamlin interview.

Tuesday afternoon it was Shannon Spake addressing this issue while hosting NASCAR Now . You can read about what happened on the new post at the top of the main page. David Newton and Andy Petree offered their comments.

Wednesday, Shana Mayfield issued a statement but did not appear on-camera during NASCAR Now. Shana confirmed she will be the interim owner, JJ Yeley will drive and that Jeremy will release a statement on Friday. The saga continues.

Here is the original TDP article from Saturday:

The news broke on Saturday that Jeremy Mayfield had been suspended from NASCAR for violating the drug policy put in place for this season by the sanctioning body.

In the new world of drug testing, there are things that both upset and confuse fans of the sport involved. In this case, NASCAR spokesman Jim Hunter read a prepared statement and only ruled-out alcohol as a substance that may be involved.

This type of statement is designed to retain the privacy of the individual tested and only advise the media of the resulting actions. Hunter stayed within the established privacy guidelines.

Unfortunately, the decades of drug abuse by other professional sports leagues have set a precedent in the media where this type of announcement is concerned. It also does not help to have several drivers in the past who have been suspended prior to this policy for addiction to several types of illegal substances.

What the media knows right now is basically nothing. That makes lots of reporting types crazy and their Internet stories reflect this frustration. Mayfield himself quickly released a statement addressing the issue. Here are some excerpts:

"As both a team owner and a driver in the NASCAR Sprint Cup Series, I have immense respect for the enforcement policies NASCAR has in place. In my case, I believe that the combination of a prescribed medicine and an over the counter medicine reacted together and resulted in a positive drug test. My Doctor and I are working with both Dr. Black and NASCAR to resolve this matter."

So, on Sunday morning we at TDP are watching the NASCAR media struggle with this first suspension of a driver under the new testing policy.

Online stories range from factual accounts to suggestions of Mayfield as an illegal drug user. One quick search of the news section of Google reveals over one thousand stories already covering the globe with the Mayfield suspension news.

Here at TDP, we are interested to see if Mayfield surfaces on either Wind Tunnel on SPEED Sunday night or the NASCAR Now program on ESPN2 Monday afternoon.

As a fan, please feel free to leave your comment about the media treatment of Mayfield and where you may have seen, heard or read about this issue. Just click the comments button below to add your post. This is a family-friendly website, please keep that in mind when posting.
Posted by Daly Planet Editor at 4:30 AM 133 comments: