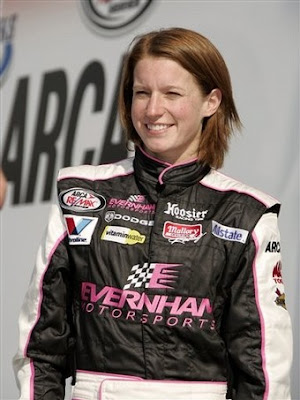 The SPEED team is spread pretty thin this weekend. The Truck Series gang is over at Gateway for a Saturday afternoon race while the Sprint Cup team is on-hand in Richmond for all the TV shows from the SPEED Stage.

Meanwhile, the ARCA Series is racing as a companion to the IRL weekend at Chicagoland Speedway. SPEED will be covering that race for a tape-delayed airing on Sunday at 4PM.

The versatile Ralph Sheheen is going to call the ARCA action with series regular Jim Tretow and sports car veteran Brian Till handling the pit road action. Joining Shaheen in the broadcast booth for the first time will be driver Erin Crocker.

This is an interesting step for Crocker, whose driving career has been off-balance since her stormy tenure at Evernham Motorsports.

This versatile driver started in quarter midgets at 7 years old. While getting a bachelor's degree in Industrial and Management Engineering at RPI University, Crocker drove in both the 360 Sprints and the 410 Dirt Sprint Series, ultimately winding-up behind the wheel of a World of Outlaws car.

In 2005, she was one of the drivers who joined the Evernham Motorsports driver development program. She drove in selected ARCA, Busch and Craftsman Truck Series races, finishing 25th in the 2006 Truck Series standings.

Also in 2006, former Evernham Motorsports driver Jeremy Mayfield called Ray Evernham out when Mayfield blamed a personal relationship between the then-married Evernham and the unmarried Crocker for affecting Mayfield's NASCAR team. Crocker's career never recovered and she has been seen less-and-less in the professional stock car ranks.

Evernham admitted to USA Today (click here) in July of 2007 that his relationship with Crocker affected her career. Evernham is 51 and Crocker is 27.

The coming weekend will give Crocker an opportunity to get her face back in the public eye and lend some commentary to a series with which she is very familiar. Sheheen is a true TV professional and just the right person to work with a new announcer.

Crocker has most recently been in the news (click here) for racing with Evernham in a new car designed as an entry-level affordable sprint car.

Evernham continues as a part-owner of Gillett-Evernham Motorsports and this season began a part-time career as a TV commentator exclusively for ESPN's NASCAR coverage.

Crocker is not scheduled to work any additional events for SPEED at this time, we will update her status as a broadcaster if additional information becomes available.

The Daly Planet welcomes comments from readers. Simply click on the comments button below and follow the easy instructions. Please read the rules for posting on the right side of the main page before adding your opinion. Thanks for stopping by.
Posted by Daly Planet Editor at 3:20 PM 72 comments: