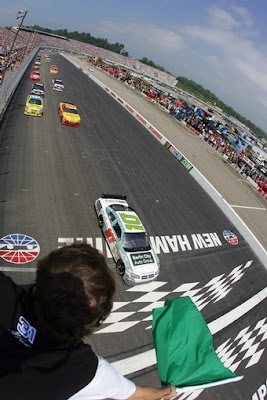 The Sprint Cup and Craftsman Truck Series are in action this week in Loudon, NH. This is the first race in the Chase for the Championship on the Cup side.

Friday TV offerings include practice, qualifying, news and entertainment. It will be ESPN2 up first at Noon ET with Sprint Cup practice. Dr. Jerry Punch, Dale Jarrett and Andy Petree will be joined by pit reporters Dave Burns, Mike Massaro, Jamie Little and Shannon Spake for the coverage.

Over on SPEED at 1PM there will be taped coverage of the Camping World East Series from Mansfield as the future stars of the sport race in what has quickly become more of a development series than anyone realized.

At 1:30PM, the practice coverage on ESPN2 ends and that network will have a thirty minute preview show of the 2008 Chase for the Championship. Last season, this show was produced by The NASCAR Media Group and was simply a look at all twelve teams and drivers.

At 2:30PM it will be Steve Byrnes, John Roberts and Bob Dillner hosting the Go or Go Home show on SPEED that discusses the teams outside the Top 35 and looks at the cars competing to make the Loudon Cup race on qualifying time.

At 3PM, the ESPN2 crew will be back and joined by Allen Bestwick, Rusty Wallace and Brad Daugherty to call the Sprint Cup qualifying session.

Once qualifying is over, there will be a thirty minute version of NASCAR Now at 5PM. After Thursday's featured story on Ron Hornaday and his steroid use several years ago, it should be interesting to see what follow-up happens on Friday's version.

The day ends with Trackside at 7PM on SPEED. Byrnes is joined by Jeff Hammond, Larry McReynolds and Elliott Sadler for an hour of conversation and fun. The two guests are Kyle Busch and NCTS driver Michael Arnett. Yes, unofficially Ron Hornaday was the original guest, but after what ESPN did to him this week he quietly cancelled. Once again, it should be interesting to hear what these pros say about the issue.

Here are some interesting notes for Saturday. NASCAR VP Robin Pemberton will join McReynolds, Chad Knaus and Bootie Barker on NASCAR Performance at 7:30PM. This will be a good opportunity to see the interaction between these panelists and the top guy in the world of the COT.

Kyle Petty is not going to make Tradin' Paint this weekend. It will be SPEED favorite Carl Edwards who joins host John Roberts and NASCAR.com writer Joe Menzer. This show continues to shy away from other veteran NASCAR media members who have opinions and would be good to see on TV. From Lee Spencer of FoxSports to Bob Margolis of Yahoo! it seems to be a closed little circle where Tradin' Paint is concerned.

Here is a quick heads-up on Sunday. Both Tony Stewart and Clint Bowyer will be live on RaceDay and Ken Squier will offer another feature on the history of the Loudon race track. Wendy Venturini's Real Deal will interview the hottest guy going into The Chase. His name is Kyle Busch.

This post will serve to host your comments about Friday's NASCAR TV offerings. To add your TV/Media-related comment, just click on the COMMENTS button below. The rules for posting are located on the right side of the main page. Thanks for stopping by.
Posted by Daly Planet Editor at 9:14 AM 43 comments: